The GeoPoll Socio-Political Barometer is an initiative to collect rapid, accurate, and robust data on key social and political issues in developing countries. It makes use of large-scale face to face survey research, supported by state-of-the-art technology that streamlines the survey process and ensures the integrity of the data. We conducted the second Barometer wave from November to December 2022. A full report will be released after the holidays, included here is an early preview of the key highlights.

The Socio-Political Barometer survey for the fourth quarter of 2022 was conducted across all provinces of the Democratic Republic of Congo from 15 November to 18 December 2022. A cluster sampling methodology was applied to draw a sample of 9,253 households across the DRC by means of Geospatial Information System (GIS) based selection. This sampling method is an improvement on wave 1 in terms of accuracy and representativeness, and reflects our ongoing commitment to constantly improving our work in challenging markets. A randomly selected adult member of each household completed a 20-minute face to face interview with a trained and experienced professional interviewer.

The Socio-Political Barometer data collected in the Democratic Republic of the Congo in November and December 2022 surfaced the following key metrics and trends.

In the Democratic Republic of Congo today, what do you think WORKS? 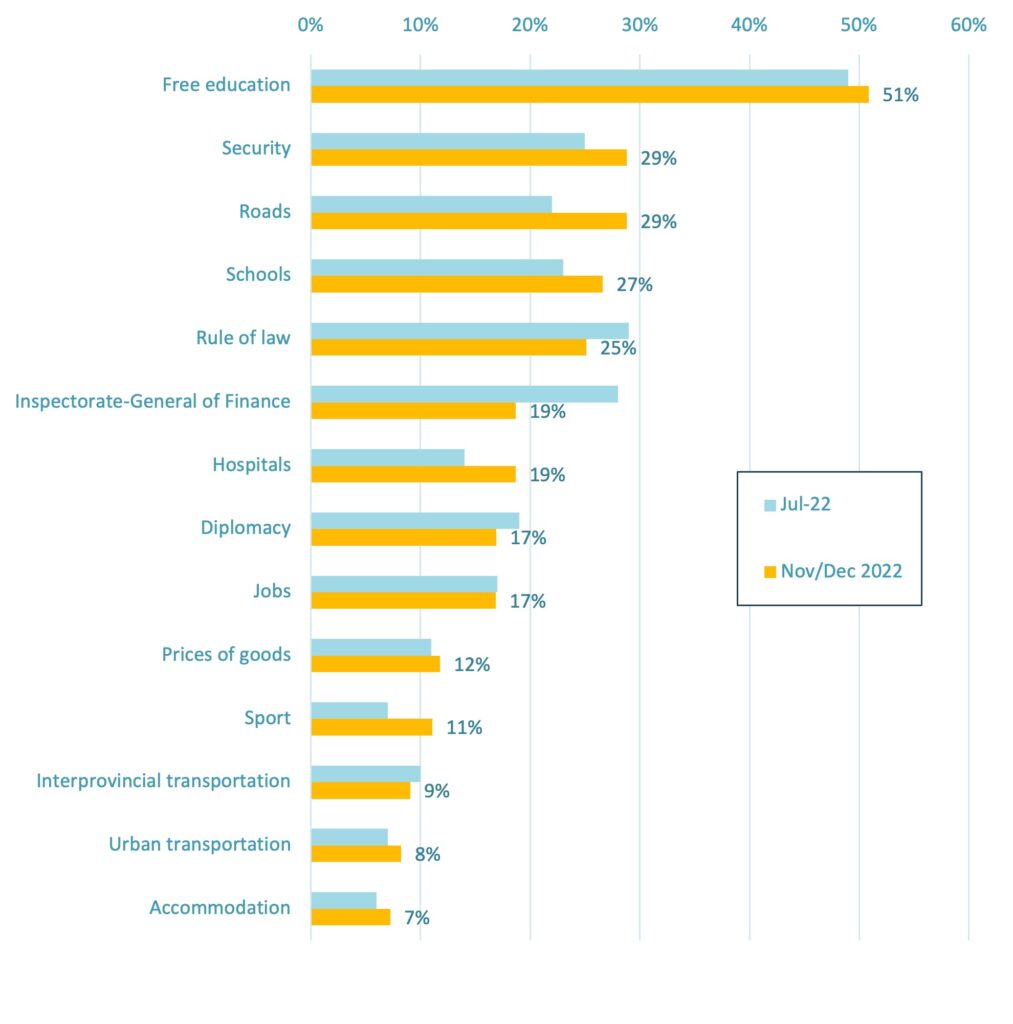 Access to free education continues to be the leading driver of optimism in the DR Congo. This wave also reveals improved perceptions of the country’s security, roads, schools, hospitals and sporting prowess. Potentially, the IGF has featured less in the news this quarter, and hence is less endorsed by respondents.

What do you think DOES NOT WORK? Unemployment and insecurity are the most cited dysfunctional areas, closely followed by the state of the country’s roads and rising prices. All are cited by more respondents this wave than in July. Security and roads appearing as both functional and dysfunctional areas suggests these are polarizing issues in Congolese society – a positive experience for some and negative for others.

How satisfied are you with President Tshisekedi’s current mandate? Would you grant him a second term at the ballot box?

Which other potential candidate also has every chance of being elected President against the incumbent?

Only half the respondents believe there is another candidate worth considering, and when pressed to specify, 29% of those said they had not decided who that candidate might be. 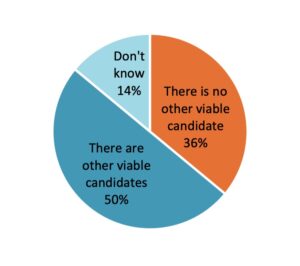 For the small minority that were willing to express support for a challenger to President Tshisekedi the leader is Martin Fayulu with 18% support, followed by Moise Katumbi on 16%. Kabila, Matata and Bemba are vying for third place at around 4-5%

It is not possible to determine if the apparent improvement in perceptions both of the country and the President are due to shifts in perception over time or a result of the improved sampling approach we took. Either way, President Tshisekedi would seem to be in a somewhat stronger position at this point in time than we initially estimated.

Look out for our full report in January 2023.

GeoPoll is currently operational on five continents and employs 104 permanent staff worldwide. Our headquarters is in Denver, Colorado, USA, with a second US office in Washington, DC focused on international development projects. Our largest office is our operations and project management hub in Nairobi, Kenya, with on the ground representatives and coordinators working across eight additional countries. GeoPoll also contracts with carefully selected and rigorously trained partners across the world who bring additional skills, expertise, technology, and capacity as required.

As a member of the European Society for Opinion and Marketing Research (ESOMAR), the Marketing and Social Research Association (MSRA) Kenya, the Pan African Media Research Organisation (PAMRO), the Society for International Development (SID), and the World Association for Public Opinion Research (WAPOR), GeoPoll adheres to the strictest ethical and research standards and employs highly rigorous methods and approaches to data collection and analysis.

SUGGESTED  How Rising Food and Fuel Prices are Impacting the World

Democratic Republic of the Congo – The GeoPoll Socio-Political Barometer Survey

TV and Radio Ratings for the Democratic Republic of Congo