Nairobi Fight Night, televised coverage of boxing action, was aired live from Nairobi, Kenya on Saturday, the 23rd of March 2019. This was the second edition of the boxing series. The program was broadcast on select Free To Air (FTA) channels and Pay TV channels including, KBC, NTV, KTN News, K24, Sports Arena, StarTimes Swahili, SuperSport Select 3 and SuperSport 9.

The title fight for the evening was the World Boxing Council (WBC) Women Super Bantamweight fight between defending champion, Kenya’s Fatuma ‘Iron Fist’ Zarika, and former champion, Catherine Phiri, from Zambia. Zarika vs. Phiri’s match was accompanied by several other undercard bouts that were also aired live on TV from 8 PM on the same evening. 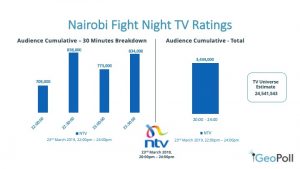 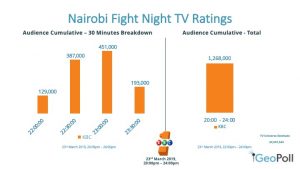 On the evening of the March 23rd, 2019, between 10 PM and 12 AM. TV channels airing Nairobi Fight Night namely KTN, KTN News, NTV, K24, and KBC were ranked after Citizen TV in terms of reach respectively. These statistics demonstrate that despite boxing being a niche sport, Nairobi Fight Night was able to attract and retain viewership during the given time period.

TV ratings present an interesting finding where content buoys viewership. GeoPoll Audience Measurement data on past sporting events that are aired live have shown a preference for local and international football as well as athletics. Boxing was responsible for a shift in Saturday viewership attesting to the growing demand for alternative TV content. The narrative on time band viewing has been put to the test through content-specific programming in Kenya.