Focus groups have long been considered the gold standard for qualitative market research. Since the 1940s researchers have utilized focus groups to capture the experiences, perceptions, attitudes, opinions, beliefs and views of select audiences or demographics. For most of that time period, focus groups were conducted exclusively in-person with a researcher or moderator sitting around a table with 6-10 recruited participants. While in-person focus groups are still popular today, recent technological advancements have led to a dramatic increase in the use of digital or virtual focus groups. The global impacts of COVID-19 have only accelerated this trend. This post details the processes and benefits of conducting focus groups, both in-person and digitally.

A focus group is a moderated discussion involving a small group of deliberately selected participants. In traditional focus groups participants meet in one location with a researcher or moderator for up to two hours and discuss specific research topics (e.g., new product concepts, ad testing, political views, etc.). The moderator leads the group discussion through a sequence of pre-determined questions meant to mimic a natural conversation. This sequence of questions is often referred to as a discussion guide.

Where focus groups differ from interviews and surveys is the interaction between group members. Members are encouraged to respond to and bounce ideas off each other, even to the point of influencing each other’s thinking. The moderator guides the flow of the discussion, using highly skilled techniques to ensure that each participant voices their opinion, and all the research questions are addressed, while remaining a neutral observer.

Traditional focus groups are typically held at a research facility. To avoid bias, the research sponsors or stakeholders are not involved in the group discussion, but may observe the focus group in real time, either through streaming video or by watching through a one-way mirror.

The perceived benefits of traditional focus groups include:

The potential drawbacks of traditional focus groups are:

Whether traditional or virtual, the general idea behind focus groups is that the group participants are representative of a larger population – and therefore their thoughts and reactions can be expected to reflect the views of that larger population. For this to be true, researchers must have a clear definition of the target population for their study.

Researchers typically work with their clients/the organization conducting the research to define the qualifying demographics and characteristics of their target audience, and then develop a screener or questionnaire to identify individuals that meet those qualifications. The screener is developed in a way that obscures the target criteria for the study so that potential respondents answer each question truthfully, rather than guessing at answers they believe the recruiter is looking for.

Because focus groups involve far fewer participants than other modes of research and each participant is expected to represent a larger population, it is imperative that each participant is both fully qualified for the study and able to express themselves effectively in a group conversation. Skilled recruiters are trained to keep the target criteria masked during the screening process and in methods for ascertaining a potential respondent’s honesty, cooperativeness, and articulateness.

Online focus groups can be run through multiple methods, including video calls, web-based chats, and mobile-based chats. All of these methods aim to gather the same type of qualitative information gathered through traditional focus groups, but they allow respondents who are unable to travel to a research center to participate.

With the expansion of broadband connectivity and the integration of video cameras into most laptops, tablets, and smartphones, the popularity of virtual focus groups has grown significantly in the past few years. The recent travel restrictions and lock-down measures due to COVID-19 have further pushed many companies and researchers to transition their intended in-person research online – including focus groups.

SUGGESTED  Focus Groups: How they Work, and Major Considerations

Virtual focus groups maintain many of the benefits of traditional focus groups without the travel costs. Some participants may also be more comfortable talking on camera than face-to-face. On the downside, broadband and webcam requirements severely limit the reach and representativeness of virtual focus groups, particularly in emerging regions of the world. 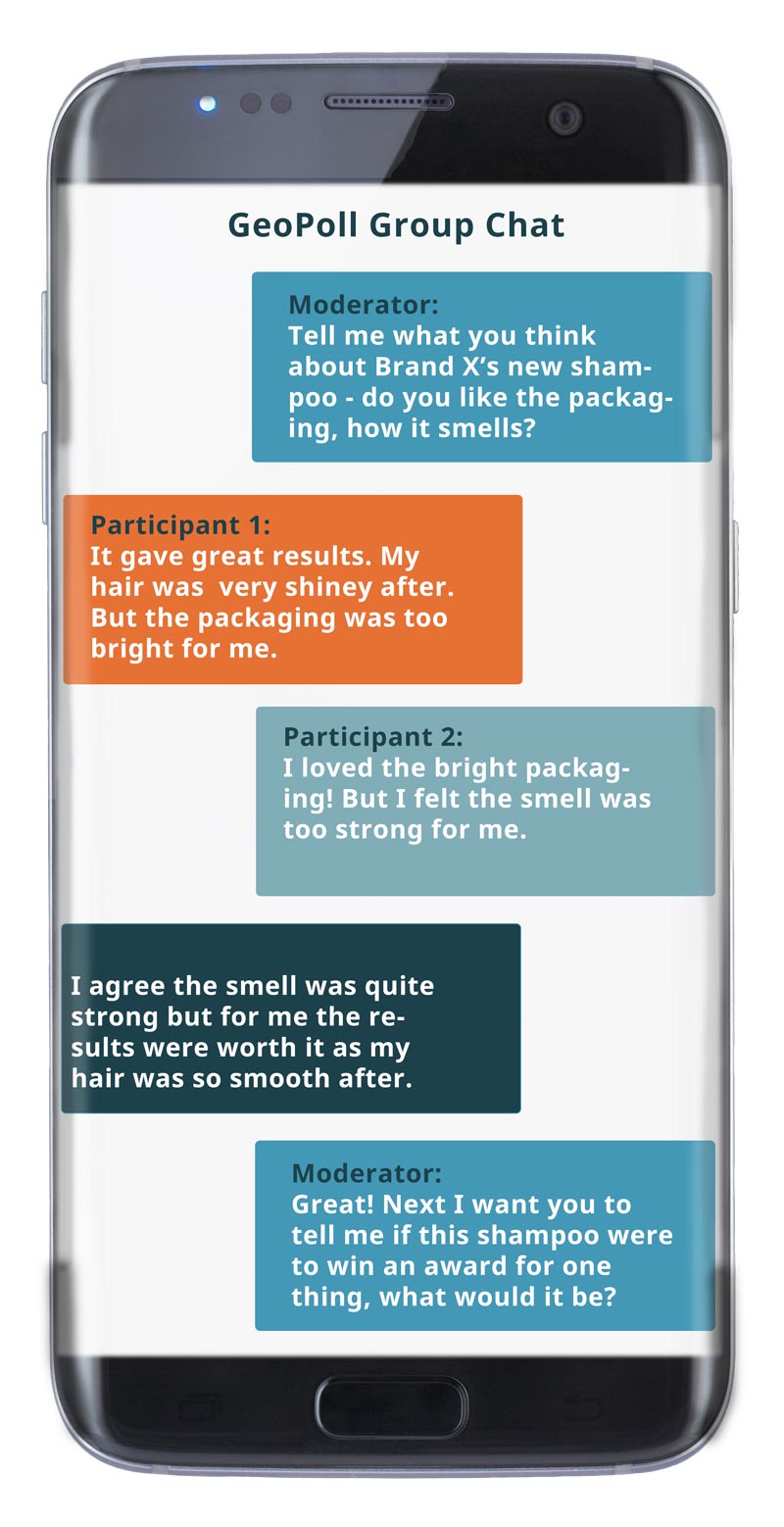 Conducting focus groups in emerging markets such as those in Africa, Asia, and Latin America or with other hard-to-reach respondents can present particular challenges. Traditional focus groups are expensive and infeasible when working with audiences located across wide geographic regions, and virtual video focus groups are limited to participants with a broadband connection and a working webcam. To sidestep these issues, many researchers have started to leverage Market Research Online Communities or MROCs. MROCs are custom recruited communities that researchers can tap into for either quick turn-around results or longitudinal data collection.

MROCs operate similarly to focus groups, only conducted virtually through a web-based chat. After recruiting and inviting participants to join an MROC, a skilled moderator engages with the community to solicit feedback, provide prompts and guide group discussion. When conducted via mobile phones, MROCs allow researchers to reach previously unreachable markets and populations.

Mobile-based MROCs such as those which GeoPoll facilitates are often conducted via a chat app, with participants and the moderator engaging in a discussion via their mobile devices. Mobile-based MROCs also allow researchers to engage with their target audience in an extended conversation rather than a two-hour session. Participants can be recruited for a one-time, multi-day discussion or for a continuous community that it incentivized to remain active to explore changes in opinion over a longer period of time.

The advantages of mobile-based focus groups include:

Some potential disadvantages of mobile-based focus groups include:

GeoPoll has experience collecting qualitative data through multiple mobile-based methods, including MROCs. GeoPoll’s mobile-based MROCs provide the best option for collecting in-depth insights from audiences across Africa and other emerging regions. Using GeoPoll’s unique mobile-based focus groups, you can gather high-quality qualitative data in a fraction of the time and cost of traditional research methods. To learn more or request a quote, contact us today.