International Women’s Day (IWD) is celebrated annually on March 8th around the world and is an important day in the movement for women’s rights. A key date in the United Nations Calendar, the theme for this year’s International Women’s Day is “Women in leadership: Achieving an equal future in a COVID-19 world.” As many studies, including GeoPoll’s collaboration with UN Women, have shown, COVID-19 has had an outsized impact on the lives of women and girls. Women often carry the burden of childcare and are more likely to fall behind in school or careers due to COVID-19 and the disruptions it has caused. Therefore, this year more than ever, focusing on gender equality is vital to achieving development goals around the globe.

For this reason, to mark International Women’s Day, GeoPoll conducted a study on gender equality in Ghana, Kenya, Nigeria, and South Africa in the first week of March 2021. The survey gathered data on realities and perceptions about International Women’s Day, gender equality in various spheres of life such as in the workplace and school, gender discrimination and harassment, and actions regarding gender inequality.

The survey gathered responses from 400 respondents per market, for a total sample size of 1600. The gender distribution was 50% female and 50% male, and the sample was roughly nationally representative by age and gender. It was conducted through GeoPoll mobile web links, which generally reach a more affluent and educated population than other methodologies such as SMS or Computer Assisted Telephone Interviewing (CATI).

Below is a summary of the research findings. For deeper details, you can interact with the data dashboard at the bottom of this article.

In the study, GeoPoll sought to establish knowledge of International Women’s Day and what respondents were planning to do to celebrate IWD. 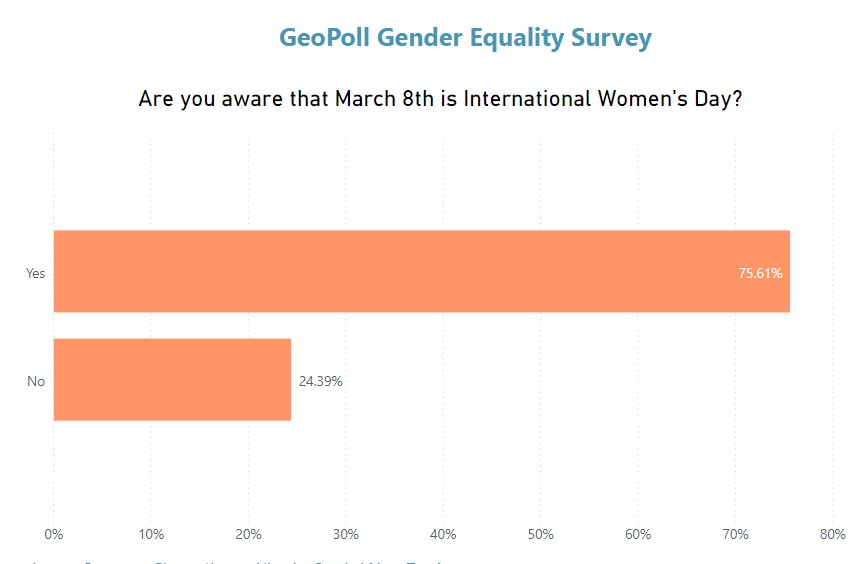 One of the biggest focuses around women’s rights in the last few decades has been gender equality in school, workplaces, and other areas, which is highlighted in goal 5 of the Sustainable Development Goals. Underrepresentation, unbalanced education, pervasive social norms, employment discrimination, and physical or sexual violence are some of the biggest challenges women and girls still face, although there has been improvement in the last few decades. In the wake of the coronavirus pandemic, UN Women has found that women are facing disparate effects when compared to men around jobs and income, gender-based violence, and education.

Gender inequality at the workplace

Regarding equality at the workplace, the largest group (29%) strongly agreed that men and women are given equal treatment, opportunities, and pay in the workplace, consistent in Kenya, Ghana, and Nigeria. In South Africa, 31% strongly disagreed with the statement, suggesting widespread inequalities in the country. 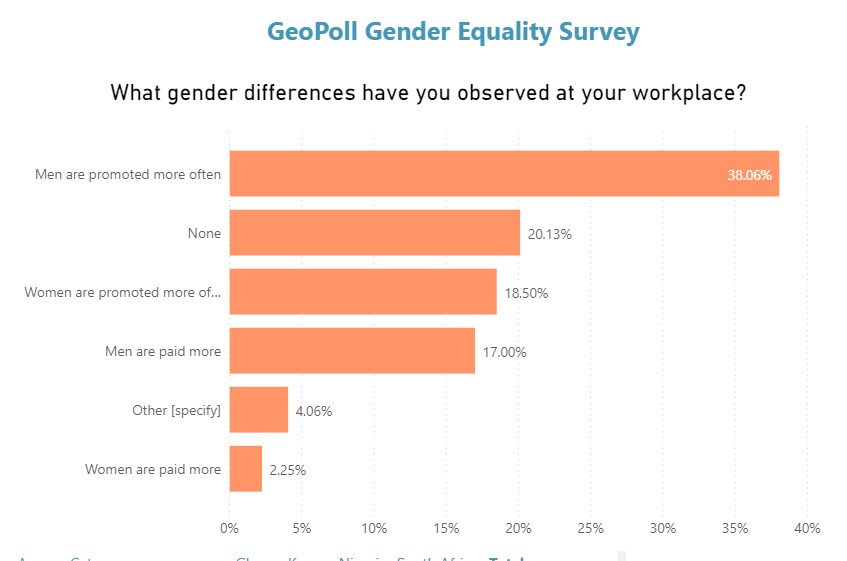 Where there was the disproportional treatment of men and women noted in the workplace, the biggest concern was that men are promoted more often than women (38%) compared to the 19% who said women have better chances of promotion than men. Only a small percentage of the respondents said that women are paid more than men (2%).

Despite these findings suggesting there is still unequal treatment at the workplace based on gender, most of the respondents believe that men and women should be treated equally, with 69% strongly agreeing to the statement, “Men and women should be given equal opportunities for pay and advancement at work.

To achieve gender inclusion, different stakeholders must make concerted efforts to improve, whether governments, commercial sectors, communities, and individuals. The GeoPoll Gender Equality survey also sought to gather ideas on actions to prevent gender inequality. Many people said that gender equality should be part of training in education and awareness campaigns, clear policies on gender should be put in place, and countries should strive for better gender representation in politics. 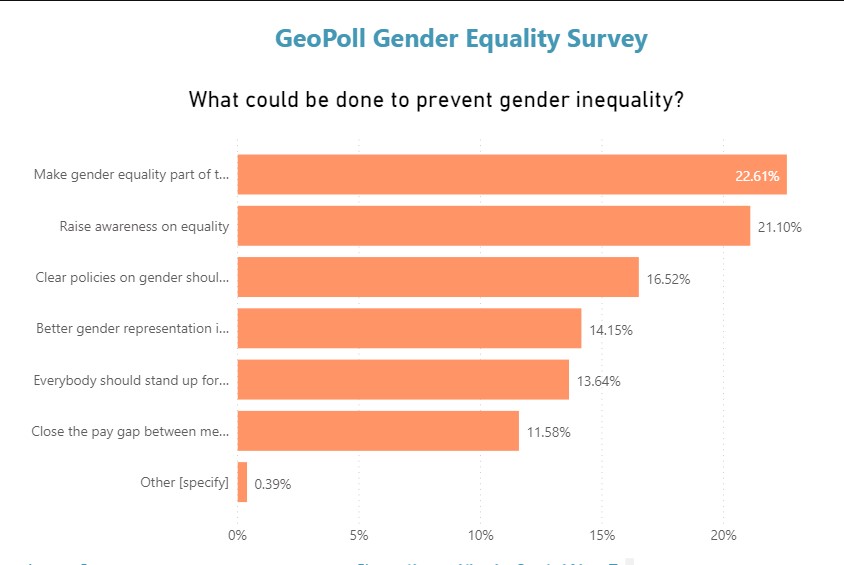 We also gauged the respondents’ opinion on governments’ actions towards ensuring that men and women are treated equally. Most of the respondents either agreed slightly (30%) or strongly (24%) that their government was doing enough to promote gender equality. This was true in all the countries except South Africa, where the largest group (26%)  strongly disagreed with this statement.

Dive deeper into GeoPoll’s data on gender equality using the dashboard below. Here, you can view all the pieces of data in this report, filterable by country, age group, gender and question:

GeoPoll conducts surveys globally through multiple mobile-based methods, remotely reaching any population. GeoPoll can conduct research to enable brands, international development organizations, and governments better understand realities on the ground, even in the face of the challenges the world is undergoing. To request more information on our capabilities or get a quote for an upcoming project, please contact us.