Bukedde 1 and NTV in Competition for Ugandan TV viewers

Uganda’s media industry is thriving, and the introduction of several new television stations over the past decade has increased competition for viewers. Until the early 2000s the state-run channel, Uganda Broadcasting Corporation (UBC) had virtually no competition, but since then several new channels have been introduced, with some taking over UBC’s lead in viewers. NTV Uganda, part of Nation Media Group which operates throughout East Africa, was launched in 2006 and is one of the most popular stations currently. Bukkede1 and Bukkede2, part of the New Vision media group, are also popular among Ugandan viewers. 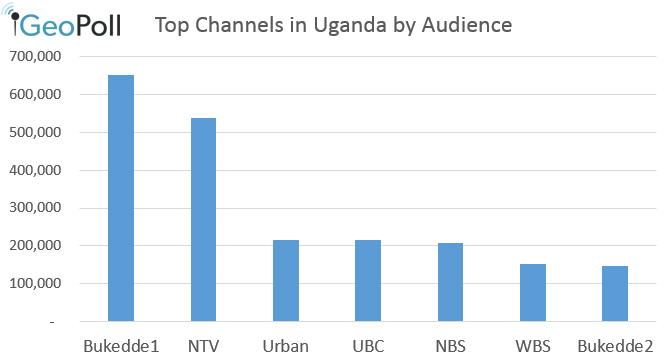 These rankings demonstrate the popularity of Bukkede1 and NTV, particularly their primetime programming. Bukkede1’s peak hour of viewing was from 8:30-9:30pm each evening, with a high average of 954,000 viewers at 8:30pm. NTV’s highest viewing hour in October was at 9pm, when the live show “NTV Tonight” airs, with an average of 730,000 viewers tuning in each day. By contrast UBC’s largest audience size is from 5:00-6:00pm, with nearly 250,000 viewers tuning in at 5:30pm.

Below are the top Ugandan TV stations in October by viewers per half hour:

This data is from GeoPoll’s Audience Measurement Service, which collects daily data on TV and Radio audience sizes, share, and more. To learn more about this subscription service and sign up for real-time, detailed media measurement data click below.