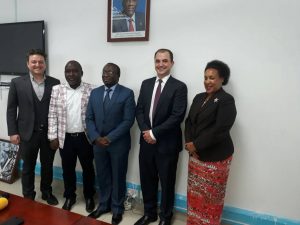 GeoPoll’s C.E.O Nicholas Becker and General Counsel, Timur Nusratty were in Tanzania recently for a series of high level meetings with government officials from the ministry of Information, Culture, Arts and Sports; the National Bureau of Statistic;media & research stakeholders. The week long series of meetings focused on the collection and dissemination of statistics in the broadcasting sector in Tanzania, and explored how GeoPoll could further assist the government of Tanzania with their research and data collection needs.

Nicholas and Timur were joined by: GeoPoll’s business development team in Tanzania, Athman Sungura and Quilnus Matembo; our Vice President for Sales in Africa, Patricia Githua; and our Senior Client Services Manager, Akinyi Okulo, for the discussions.

On 19 April 2018, GeoPoll’s CEO attended a ministerial meeting with the Minister of Information, Culture, Arts and Sports of the United Republic of Tanzania, the Honorable Dr. Harrison G. Mwakyembe (MP) in Dodoma, Tanzania. The meeting was also attended by other esteemed members of the Minister’s team, representatives from the NBS, and a delegation from GeoPoll.

Following the meeting, the GeoPoll team together with the ministry officials confirmed GeoPoll’s proud status as a registered licensed company in Tanzania with an office address in Dar es Salaam, which was further confirmed by Senior Publicity Officer of the NBS, Said J. Ameir. GeoPoll’s best-in-class methodology, quality of data, and value for Tanzania’s media and market research services was highlighted during the meeting, and the minister provided his endorsement of GeoPoll, officially welcoming GeoPoll to Tanzania. In addition, the minister urged  stakeholders in the audience measurement and market research sectors to welcome and support GeoPoll’s services in Tanzania.

On 21 April 2018 a stakeholder’s meeting on the collection and dissemination of statistics in the broadcasting sector was hosted by the National Bureau of Statistics (NBS) in Dar es Salaam and chaired by the Director General of the NBS, the Honorable Dr. Albina Chuwa.

Ongoing Collaboration with the NBS and Tanzanian Government 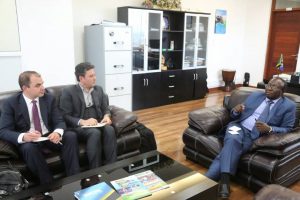 Following the meetings, Dr. Chuwa expressed interest in further collaboration with GeoPoll around solving the data collection needs of the NBS and those of the audience measurement stakeholders. GeoPoll looks forward to continuing our important work in Tanzania and would like to thank the Honorable Dr. Harrison G. Mwakyembe (MP), Dr. Chuwa and all the ministry officials for their warm welcome and for their unwavering endorsement of our media research in the Republic of Tanzania. We look forward to collaborating with other market research companies operating in Tanzania to bring more data collection options to the country, and to working with media owners, brands, and other businesses looking to find fast, high quality, and affordable ways to conduct research in Tanzania.

To learn more about GeoPoll’s services in Tanzania or to get in touch with one of our representatives in the country, please contact us using the form below.