Following our initial survey in Mozambique, which was deployed in the days after Cyclone Idais’s devastation in the country, GeoPoll is releasing results from a second survey conducted in the region. Highlights of the data, which is shown in an interactive dashboard below, show high levels of concern around cholera and a need for food and medical aid. Initial data on the economic impact of Cyclone Idai indicates that a large portion of the population has lost business and/or income as a result of the storm.

Cyclone Idai caused widespread destruction in Mozambique, particularly in the coastal city of Beira, which suffered flooding so severe that aid agencies could only access the city via plane. A month after the cyclone, the city is beginning to recover, and the humanitarian community’s recovery efforts have been heavily focused on health risks that often stem from a natural disaster such as cholera, malaria, and malnutrition. Cholera, which is caused by a lack of clean water, is already spreading in the country, and aid agencies have been administering thousands of vaccinations to prevent the spread from worsening. In addition, food resources for much of the population were destroyed due to crop damage and food spoilage caused by flooding, so food security is also a concern.

GeoPoll’s second survey collected data from 503 households representing over 3200 individuals on the situation on the ground in Inhambane, Manica, Sofala, and Zambezia provinces. Data was collected from March 31st through April 9th, and all respondents indicated that their community had been impacted by Cyclone Idai. The survey was administered by SMS in Portuguese.

Electricity and Clean Water in Mozambique 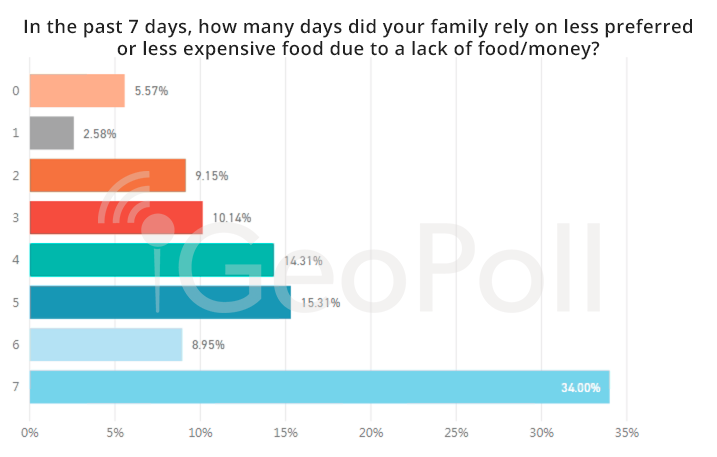 Many aid agencies have descended on the area to provide vital resources; however not all individuals have felt their presence on the ground. Overall 42.5% say that aid organizations or government workers are in their area to provide relief, and interestingly in Beira, which has been at the center of much of the press coverage and relief efforts, only 32.5% say aid organizations are in their area. Just 28.8% in Beira have received aid in the past 7 days.

Food aid is the most needed aid by communities, with 35.8% in all provinces and 41.3% in Beira saying food aid is needed over clean water, medical assistance, and electricity. However, in total only 90 households out of the 503 surveyed, or 17.8%, say they have received food aid in the past 7 days.

Medical Needs and Cholera in Mozambique

GeoPoll’s survey shows high levels of concern over the spread of cholera in the wake of Cyclone Idai. Of all those surveyed, 85.9% say they are very concerned about contracting cholera, and only 1.8% are not worried at all about the disease. A large percentage also report knowing people who have already contracted cholera; 41.6% in all regions and 57.1% in Sofala say they know someone who has contracted cholera since the cyclone. In addition, 41.4% have reported illness or injuries since the cyclone, and of those 26.8% have reported diarrhea or vomiting, and 43.1% report having cuts or wounds.

In terms of access to doctors and medicine, 53.5% of respondents say they have had sufficient access to medical care and the necessary medicine since the cyclone. In Sofala, this number is slightly lower, with 46.6% saying they have had adequate access to medical care. We examined the medical questions by age and gender and did not find major differences between the different age groups or gender in terms of concern over cholera, knowledge of people who have contracted cholera, or the rates of illness. However, we do find that the older age group (35+) were less likely to report they had access to the medical care they needed, with 45.9% of those aged 35 and older saying they’ve received sufficient medical care compared to 54.6% for those from 25-34 and 55.8% for those aged 18-24. While the full impact of Cyclone Idai will not be understood for some time, it is expected to be severe, with over $1 billion in damages to infrastructure, and more than 500,000 hectares of crops destroyed, according to the United Nations. Prices for good are expected to rise at a time when many have lost their source of livelihood, further impacting the problem. GeoPoll found that only 22.3% of respondents are currently working, and 45.3% reported that the cyclone has caused them to lose their business – likely due to the widespread destruction of crops in the region.

As recovery and aid efforts continue, the humanitarian community will need regular data on progress, and remote surveys conducted through mobile phones are a fast and cost-effective mechanism for gathering on-the-ground data. Contact GeoPoll today to learn about our capabilities and coverage in Mozambique, Malwai, and Zimbabwe, and sign up below to be updated on future survey reports on the Cyclone Idai recovery from GeoPoll.

Get Alerted to New Data on Cyclone Idai