Slowly but surely, mobile phone penetration in Africa is improving. In this article, we discuss the current state of mobile phone usage, the implications of this technology, and what future predictions indicate.

What does “Mobile Penetration” Mean?

In order to examine mobile phone penetration, we must first define what we mean by ‘mobile penetration rate’ – there are two definitions of the term that are commonly used:

There is a third, less-used definition, which depending on the circumstance should also be considered:

As these terms are used interchangeably depending on the source, in order to get a complete picture of mobile penetration rates we should consider all three of these types of penetration, and examine multiple data sources for each. Below we go through the challenges of gathering accurate data on mobile penetration in sub-Saharan Africa and present some of the most recent statistics that are available publicly.

The Challenge of Gathering Mobile Penetration Rates in Africa

In recent years, mobile phone penetration is sub-Saharan Africa has increased dramatically. According to the most recent report from GSMA, an association of mobile network operators worldwide, there are 747 million SIM connections in sub-Saharan Africa, representing 75% of the population. However, it can be difficult to get an accurate estimate of the number of unique subscribers throughout the region, and even more challenging to tell who has access to a mobile phone, even if they do not own one. This is due to multiple factors around phone usage in sub-Saharan Africa: For example, it is common for individuals to own multiple SIM cards, switching between them in order to take advantage of a particular network’s deals or to maintain service when one network goes down. At the same time, if an individual does not own a phone, they may have access to someone else’s: Even in 2013, 58% of Kenyans who did not own a mobile phone said that they shared one with someone else.

In addition, data collection in this diverse region is difficult, especially when measuring statistics such as mobile penetration, which require face-to-face data collection in order to include those who cannot be reached via mobile. Language barriers, lack of infrastructure, and the sheer number of people throughout Sub-Saharan Africa make collecting face-to-face data nearly impossible due to cost and time constraints, especially in rural areas. No one knows, in fact, just how many people live in this region— some nations have not conducted a census in decades, if at all. Political turmoil poses another obstacle, as many citizens of turbulent nations like The Democratic Republic of the Congo are displaced and otherwise unaccounted for.

While mobile-based surveying methodologies can alleviate these issues, getting the initial statistics on mobile usage can be a challenge. There have not been any studies throughout sub-Saharan Africa looking at mobile usage, and most available statistics rely on numbers provided from mobile network operators. 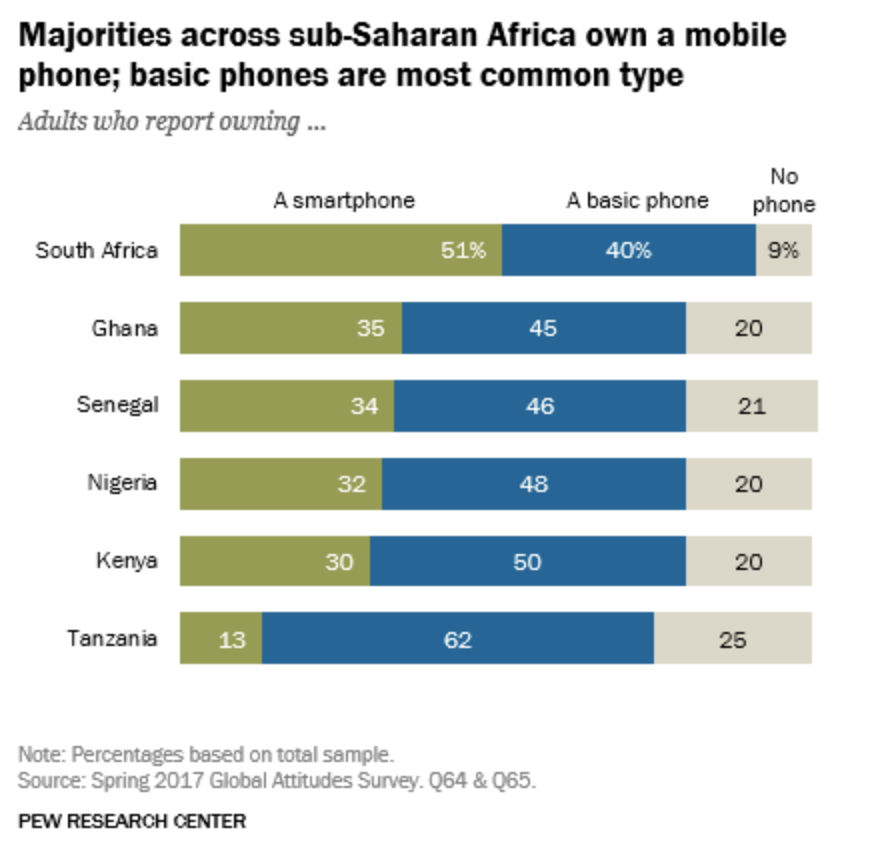 For the most recent unique subscriber penetration numbers in multiple countries in sub-Saharan Africa, we also recommend this report from GSMA in 2017, though their estimates for unique penetration are less than those found through research firms such as Pew and would not take shared mobile devices into account.

Unsurprisingly, countries with higher concentrations of mobile phone usage and mobile phone access have more successful economies. Without mobile phones and broadband access, rural nations lack the resources necessary to expand their GDP.  Mobile technology, particularly in the past decade, is essential to keep up with international trade and pioneer new innovations. Kenya’s economy is a shining example of what’s to come.

Since the introduction of liberal telecommunications legislation in the late ‘90s, Kenya’s economy has transformed. Mobile penetration rates rose from 1% in 2002 to 39% in 2014, a monumental shift in little more than a decade. This increase was only the beginning— as of 2019, Kenya’s SIM connection penetration rate is an incredible 100.1%.

This increased mobile access plays a major part in the nation’s growing economy. New developments like the Kenya Internet Exchange point, which serves as an international routing hub for the country’s mobile technology, have allowed mobile-based systems to take root throughout the nation. Thanks to their high mobile phone penetration rate, Kenya is now home to key advancements like cutting-edge IoT technology. Mobile banking is changing the face of Kenya, too, and is now available in previously underserved rural areas. As such, productivity, profitability, and even infrastructure is rapidly improving.

What’s Next for Mobile in Africa?

Mobile phone penetration is skyrocketing throughout Sub-Saharan Africa. As mobile phone technology becomes more widespread and less expensive, more sub-Saharan African citizens will have access to technology that was previously inaccessible. According to GSMA’s Mobile Economy Report Series, 84% of the population (1 billion people) will have access to a SIM connection by 2025, a 3.7% increase from 2017.  This increased penetration is estimated to increase the Sub-Saharan African Economy by as much as $150 billion.

As this growth occurs, it is important for more studies to be conducted on mobile access in addition to mobile penetration. We should also continue to examine smartphone and mobile internet adoption while making sure not to discount those portions of the population who do not have access to mobile internet. GeoPoll leverages the growing power of mobile to conduct surveys throughout sub-Saharan Africa. We reach people on their own mobile devices through SMS surveys, voice calls, and web-based methodologies, and also conduct in-person surveys recorded on mobile devices in order to reach those who do not have access to their own mobile phone. For more information on our mobile methodology please contact us today.