We’ve been running daily mobile surveys in Ghana as part of our TV Measurement Service, and are excited to share some of our findings from the month of April. Ghana has a population of over 25 million, and is one of the fastest growing nations in West Africa, which makes it an attractive area for advertisers, brands, and international broadcasters.  Their media market is quite diverse for Africa, with both national and international television channels broadcasting in the country.

Of the top three channels, TV3 and UTV are both private, free-to-air channels, while GTV is the national public broadcaster in Ghana. TV3 launched in 1997 and includes news updates, reality TV, and other entertainment shows, while UTV is the newest television station in Ghana, and has a “24/7 line-up of well produced family entertainment dedicated to delivering informative and entertaining programming”.  We will be interested in seeing if UTV surpasses TV3 in viewership share in future months. The below list represents the audience distribution for the top channels in April: 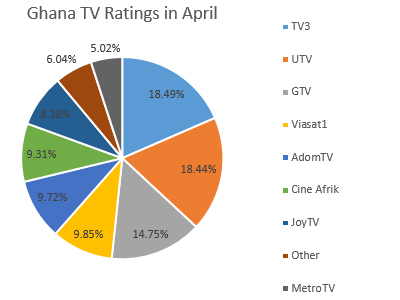