Over the past year, the conflict in Ethiopia between the federal government and the leadership of the northern region of Tigray has killed tens of thousands of people, displaced more than two million, and triggered a massive humanitarian crisis. The World Food Program recently suspended food distribution in some of the hardest hit areas in the country, after staff members were held at gunpoint and food supplies were looted. The plundering of food supplies threatens to worsen malnutrition in Ethiopia, where the United Nations estimates that at least 9.4 million people are suffering from food insecurity. 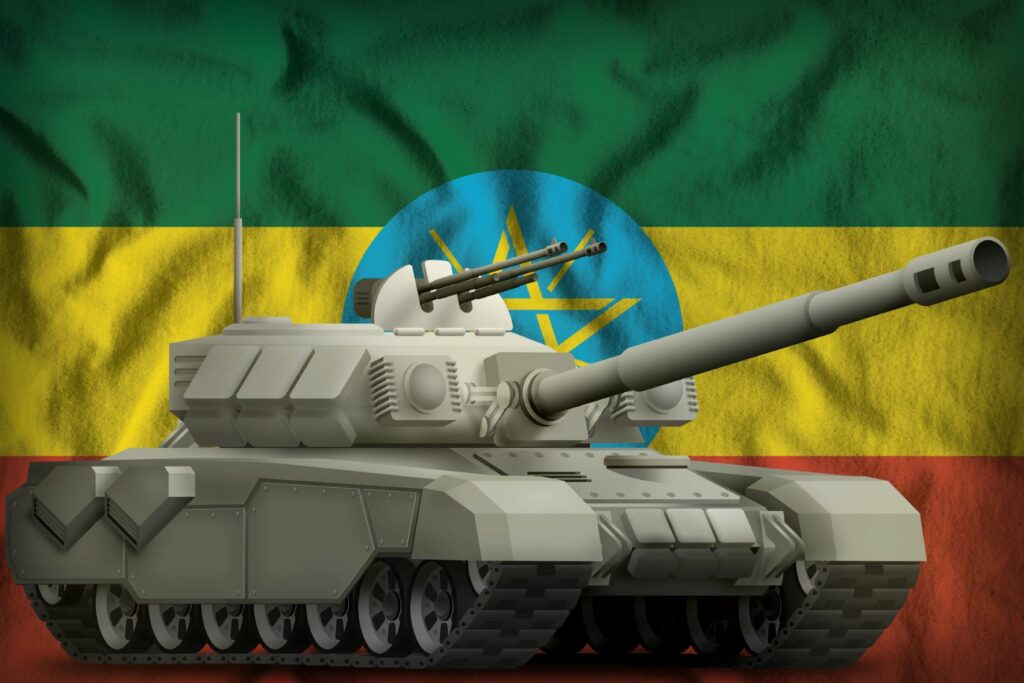 With the conflict showing no signs of abating and international efforts to end the hostilities so far failing to yield any results, GeoPoll conducted a remote mobile phone-based survey in December, 2021 to gather on the ground information about the crisis. The survey reached a sample size of 418 respondents, which provides a 5% margin of error and a 95% confidence interval. The study was not purely scientific, however, as an ongoing communications blackout effectively prevented participation from much of Northern Ethiopia – Tigray in particular.

The questionnaire was designed by GeoPoll researchers, translated into the local language, Amharic, and conducted via SMS. All respondents opted in to the study and were given information regarding the confidentiality of their responses.

Topics covered in the survey include:

Preliminary insights from the survey data are detailed in this post. To view the full results of the study, filterable by question, region, age group, and gender, scroll down to the Interactive Data Dashboard.

Despite a communications blackout limiting participation from Tigray and neighboring regions at the epicenter of the conflict, results from GeoPoll’s study show widespread unrest. Across Ethiopia, 17% of respondents have been forced to move or flee recently due to the conflict, and 50% know someone who has been forced to move or flee. According to respondents, most who have fled have stayed within Ethiopia.

Human rights groups have reported numerous incidences of atrocities against civilians by all the warring parties in the conflict. Although most of those atrocities have occurred in the northern regions behind the communications blackout, 38% of respondents in our study feel unsafe in their everyday life and 26% have personally witnessed violence. Only 22% report feeling “very safe.” 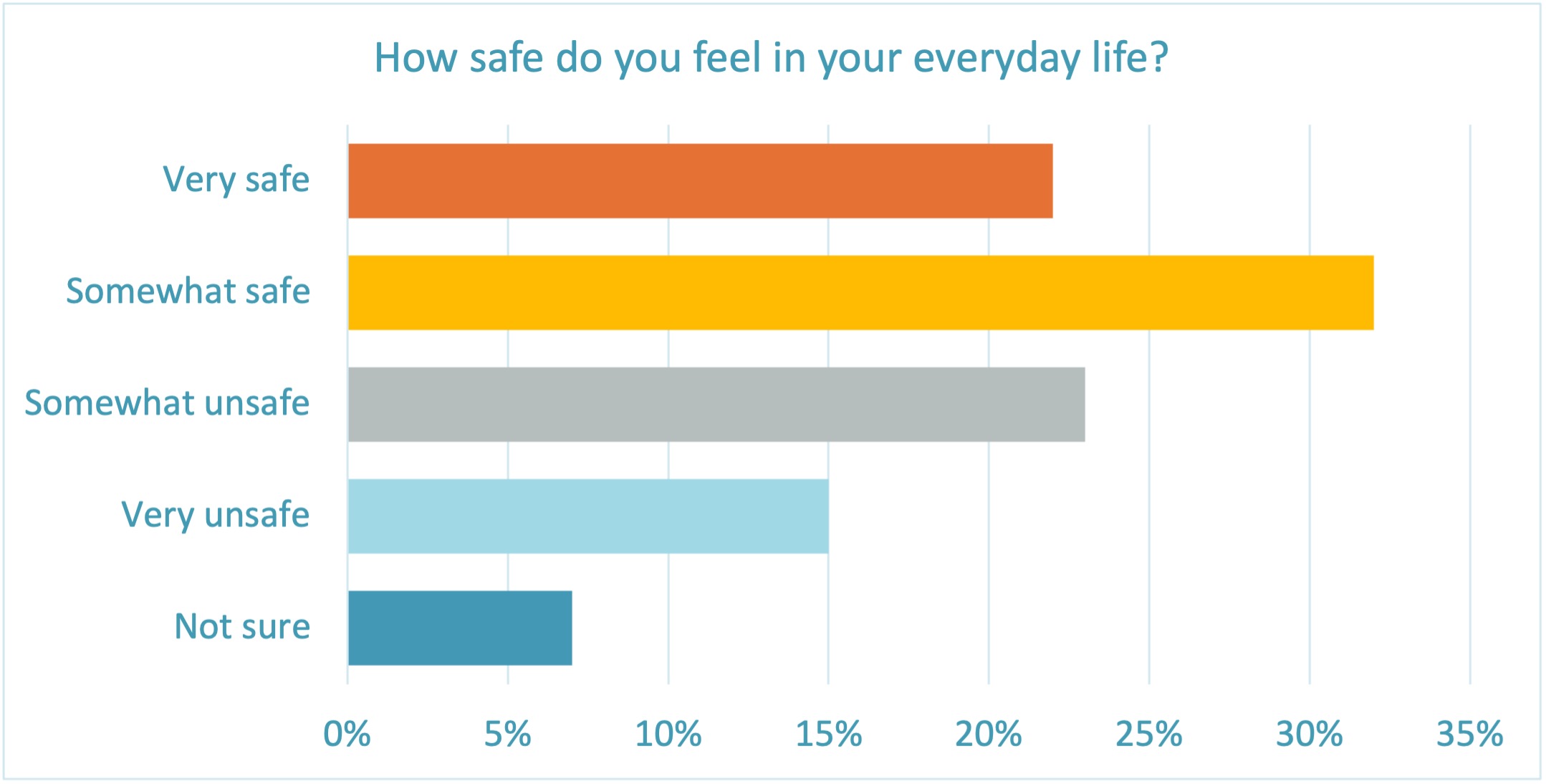 Concerns About the Conflict Spreading 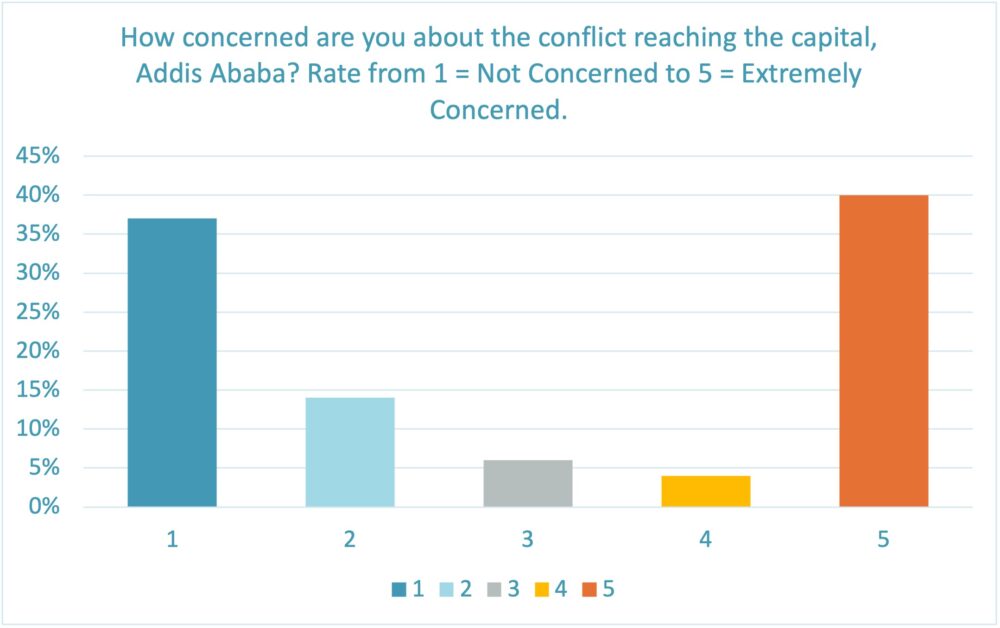 So far, international calls for peace have failed to quell the fighting. Few in our study believe any international entities (African Union, UN, US, China, etc.) can play a significant role in peacebuilding efforts. Many say community leaders should play that role.

Despite growing international concern that the fighting in Tigray could break Ethiopia apart, 63% of respondents believe the country is headed in the right direction. Only 9% say it is headed in the wrong direction. Approximately one in every four respondents say they are not sure, illustrating the uncertainty of the current situation.

According to the United Nations, the fighting in Ethiopia has driven hundreds of thousands into famine-like conditions.

The conditions are most dire in Tigray, where a de facto blockade has kept desperately needed aid from reaching the area for months.

A scan of the results from our study illustrates the hardships experienced outside of Tigray, including: 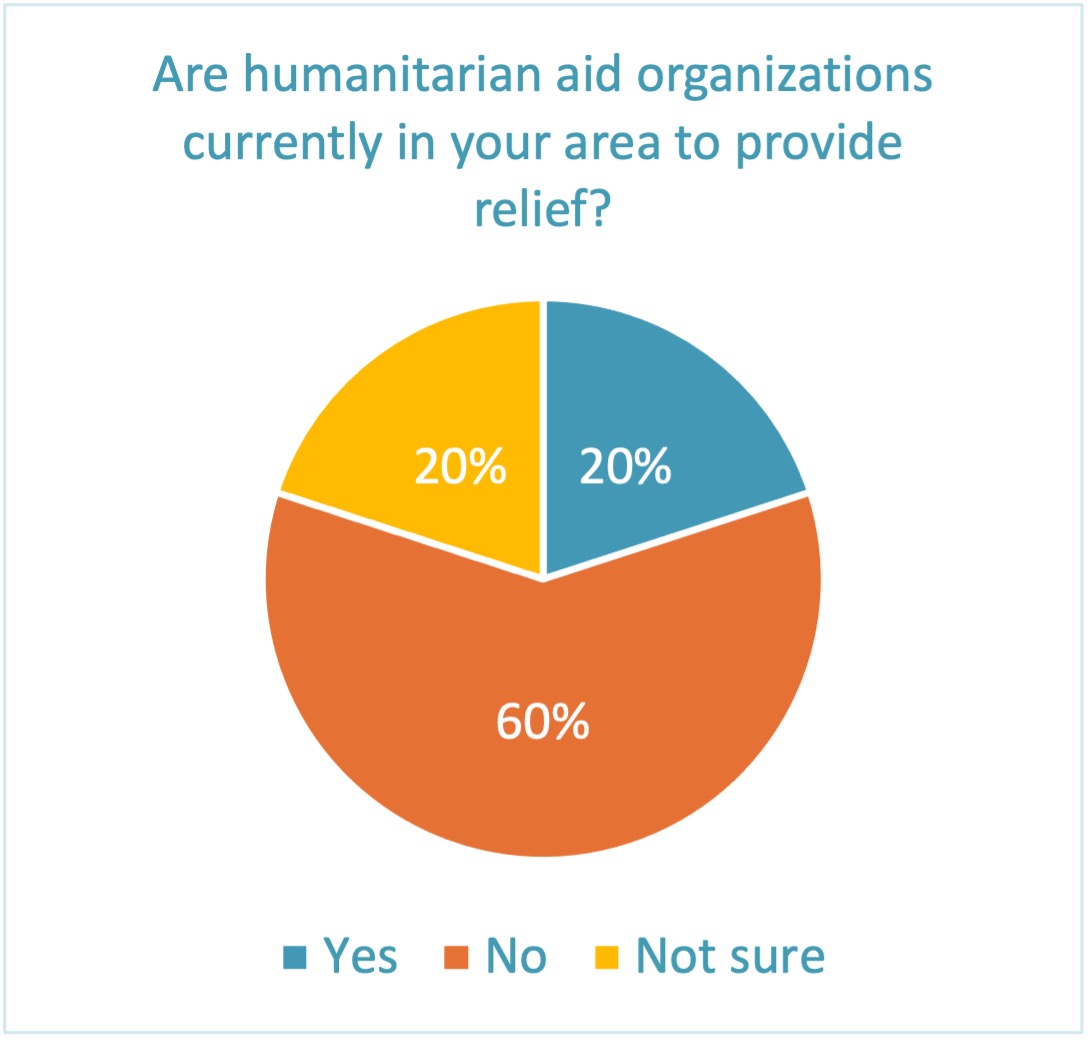 In the midst of these hardships, most respondents do not believe humanitarian aid organizations are currently in their area to provide relief. Only 9% say they have received humanitarian aid in the past 30 days. In November, 2021, the United Nations announced it had released emergency funds to scale up humanitarian operations in Ethiopia. Delivering aid to citizens most in need remains a challenge, however.

Journalists working in Ethiopia face restrictions under a nationwide state of emergency declared by the government in October, 2021. News stories are being strictly monitored and controlled, and more than a dozen journalists have been detained. In this hostile media environment, it follows that 29% of respondents in our study do not trust any sources of news. TV the most trusted news source at 38%. Social media comes in second at only 17%. 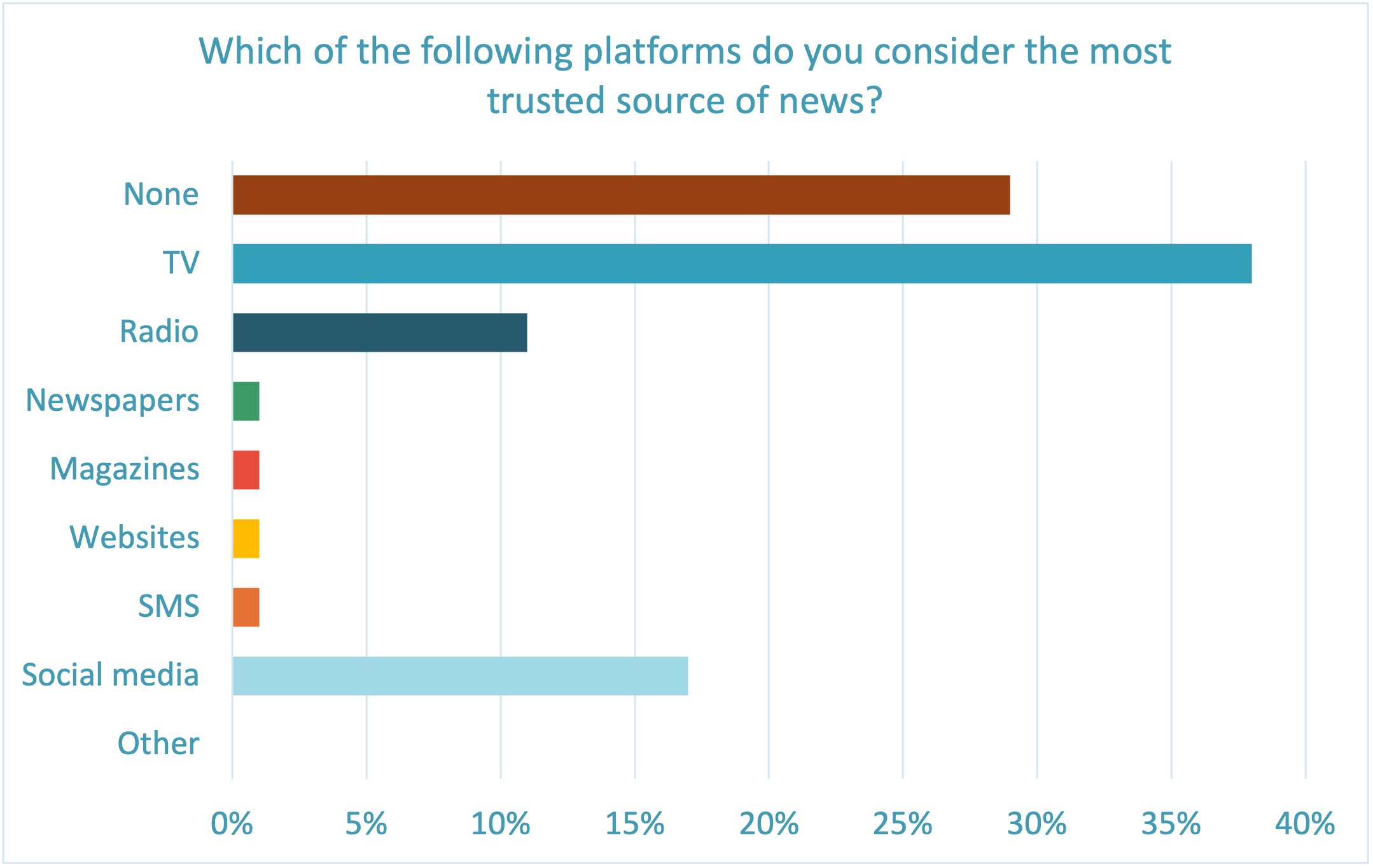 Dive deeper into the full results from this study using the dashboard below. The dashboard provides responses to each question in the survey, filterable by region, age group, and gender.

GeoPoll has extensive experience conducting research in vulnerable areas through remote mobile-based methodologies. In times when it is otherwise impossible to get information from people on the ground, remote data collection can play a pivotal role in capturing the sentiment and realities in hard-to-reach areas.

To learn more about GeoPoll’s capabilities in Ethiopia and around the world, please contact us.

GeoPoll Report: On the Ground Data on the Humanitarian Crisis in Afghanistan