GeoPoll believes in TMCS’s mission of strengthening Tanzania’s media ecosystem by building the capacity of media outlets through training and technical assistance. The partnership with TMCS for the training allowed GeoPoll to assist in driving the mission forward. In order to do our part, GeoPoll provided the trainees with nationally representative audience measurement data tailored to specific program indicators. The data was used as a tool for training the attending media stakeholders on practical ways to use audience measurement data to improve the quality of community radio programming, increase listenership, and generate additional advertising revenue. 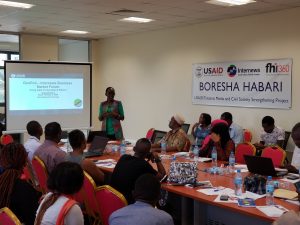 Akinyi began training by presenting the audience measurement data to the approximately 28 representatives from the 18 community-based radio station in attendance. The measurement data provided a comprehensive overview of the methodology and the data collected in February 2019. Community-based radio station representatives examined the results of the audience measurement data for stations Safari FM, Arusha One FM, and Chai FM, then explained how they adjusted their programming to reach more listeners as a lesson learned from the June 2018 training, Data-Driven Decisions Making – Radio Media.

Next, GeoPoll presented data from a GeoPoll SMS survey on Tanzanians’ perceptions of leading radio advertisements in the country. This survey was nationally representative at the region, age, and, gender demographics as well as reflective of awareness and appeal of major advertisements. This data survey was a used in order for the community radio stations to practice drawing conclusions from data in order to understand what types of advertisements are most appealing to Tanzanians. The exercise was guided by the training lead, Akyini, and completed on a local level, meaning participants examined data from the provinces where their radio stations operate—which encouraged the development of a targeted advertisement approach.

Training participants were then asked to collectively discuss how to improve their appeal to major advertisers and conceptualize how GeoPoll’s provided data could be used to capture and monetize potential advertisers. The training was very well-received and representatives from the community radio stations in attendance expressed a newly developed understanding of why such data is important to improving the sustainability of their respective stations.

Beyond this training session, GeoPoll will continue to work on teaching how to build the sustainability of the targeted community radio ecosystem. The series on using data for decision-making to improve listenership and the business of community-based radio stations is not over yet. GeoPoll will hold bi-annual trainings on data collected under Boresha Habari/TMCS to further acclimate community-based radio stations on how data can be used effectively for growth and sustainability.

As leaders in data collection throughout Africa, GeoPoll’s Audience Measurement data is highly respected by media agencies. Our trainings can be customized to the needs of any team seeking to learn how to analyze data for thoughtful decision making in media as well as other industries. Contact us to learn more about our trainings or data collection capabilities today.