COVID-19 Research in Latin America and the Caribbean

One unique aspect of COVID-19 is the way in which it spreads through asymptomatic carriers, and the relatively lengthy time it can take for the virus to display itself. For health researchers and humanitarian organizations, this has presented a challenge when attempting to predict upcoming hot spots and prevent them from growing. In the humanitarian sector, there has been concern over the potential of the virus’ spread in less developed regions such as sub-Saharan Africa and Latin America. Weak healthcare systems and heavily populated cities in these regions could lead to a fast spread, but there is often little visibility into the virus’ progression in these areas. 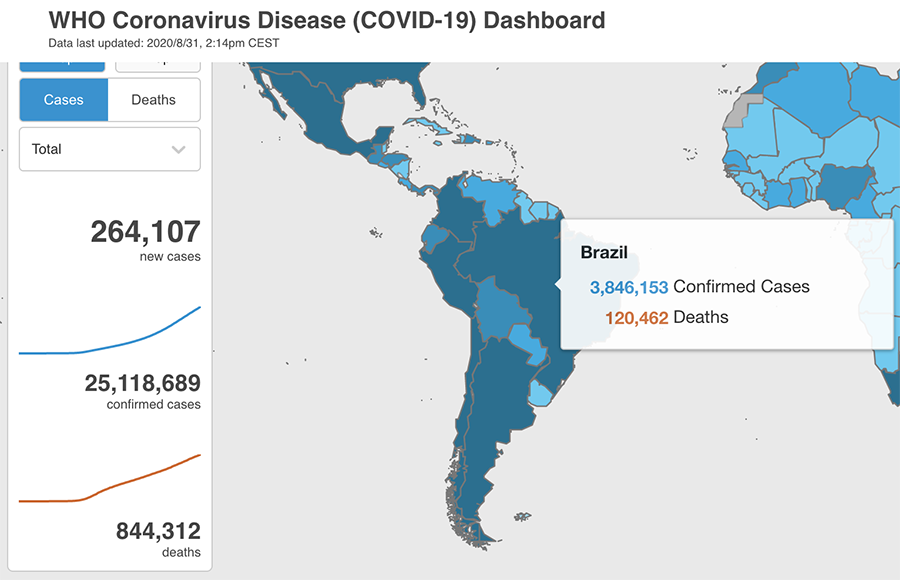 While COVID-19 is undoubtedly having an impact on economies in sub-Saharan Africa, cases and deaths in the region so far have been relatively low, a fact which has perplexed many scientists. Low testing rates could be partially to blame, however countries such as Kenya have not seen a large rise in unattributed deaths that could have been caused by coronavirus. For now, the real crisis in emerging regions is in Latin America. Brazil, Latin America’s most populated country, has recorded over 110,000 deaths, and the entire region spanning from Mexico to Chile has experienced over 250,000 deaths and 5 million cases.

Conducting Research in Latin America and the Caribbean

The United Nations has predicted that COVID-19 will lead to the worst recession in Latin America in 100 years, and the impacts of the pandemic in Latin America have been exasperated by existing conditions including high rates of poverty, impacts of climate change, and violence. The Caribbean is also facing unique challenges due to COVID-19. While most island nations have low case counts, their reliance on tourism and high costs of imported goods will have a strong economic effect, with the IMF predicting an economic contraction of 6.2% in the Caribbean.

Government corruption and humanitarian crises in the region can not only compound the effect of COVID-19, but also make gathering accurate data on the virus’ impacts a challenge. Official reporting can often be incomplete; In June, Brazil was ordered by its own Supreme Court to reinstate a website reporting COVID-19 cases after it had been taken down by the government. In Venezuela, which is still in the midst of a political crisis that has alienated it’s government from other countries, it is widely suspected that the actual case count is much higher than has been officially reported.

In addition to inconsistent government reporting, COVID-19 has prevented international organizations from safely gathering on-the-ground data in Latin American and the Caribbean. A lack of reliable, accurate data on not only the spread of COVID-19 itself but also its impact on areas including food security, job loss, and education can make it difficult for humanitarian and healthcare organizations to effectively assess needs and deliver aid. Due to the infeasibility of face-to-face research, humanitarian organizations have turned to Computer Assisted Telephone Interviewing (CATI) to continue gathering vital data in Latin America and the Caribbean. Organizations including the Inter-American Development Bank, Innovations for Poverty Action, and the World Bank are already using CATI for research projects examining COVID-19’s impact on everything from education and family wellbeing, to how indigenous populations are being affected by the virus.

CATI enables organizations to conduct research even with those who are illiterate and do not have internet access by using voice calls from trained local interviewers. Latin America has one of the fastest growth rates of mobile penetration in the globe, and mobile-based methods such as CATI voice calls allow for research to be conducted safely and remotely. GeoPoll currently operates call centers in several countries in Latin America and has capabilities throughout the region. To learn more about GeoPoll’s operations in Latin America and the Caribbean please contact us today.