Latin America consists of the entire continent of South America in addition to Mexico, Central America, and the islands of the Caribbean, and the term generally applies to all countries whose inhabitants speak a Romance language. In this article, we examine mobile penetration in Latin America and the state of various mobile technologies such as mobile internet, smartphone adoption, and mobile money in Latin America. 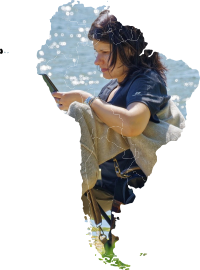 Latin America is on average one of the highest adopters of mobile phones. As early as 2013, the region was the third in SIM penetration, behind Eastern & Central Europe and Western Europe.

According to the GSMA, more than two-thirds of Latin America’s population is connected to a mobile network, with 70% of the regional population being unique mobile subscribers in 2020. However, there is a wide variation in subscriber penetration levels; some countries such as Panama, Argentina, Chile, and Uruguay are approaching full penetration (over 80%). Other countries such as Cuba, Guatemala, Honduras, and Nicaragua,  still have some ground to cover in mobile penetration rates.

As with other regions, the mobile industry is becoming an essential economic contributor in the region. Apart from the direct revenue injection from mobile products and services, countries increasingly benefit from the improvements in productivity and efficiency brought about by the increased take-up of mobile services. In 2019, mobile technologies and services contributed at least seven-per-cent to regional GDP.

Part of the reason for the exponential growth of mobile in Latin America is that mobile is the primary tool for internet access in Latin America, as it provides a portable way for people living in rural areas to get online. The social media boom and rise in messaging platforms have also spurred demand for optimized mobile services in recent years.

Among mobile subscribers, GSMA reports that nearly 80% are connected to mobile internet. Statistica estimates that in 2018, there were 326 million mobile internet users in the region, and that figure is anticipated to increase to over 422 million users by 2025.

Mobile internet in Latin America is expected to become more pronounced as 5G becomes a reality. Already, countries like Brazil and Uruguay have launched 5G, and other countries such as Chile, Colombia, and the Dominican Republic have kickstarted getting into 5G in 2021.

Closely related to mobile internet, Latin America has one of the highest and fastest-growing smartphone penetration rates in the emerging markets: At least 69 percent of all mobile connections in Latin America are smartphones, with predictions that 90% of all regional Internet connections will take place on mobile devices by 2022.

Despite the large portions of the population who have access to cell phones and the mobile internet, approximately 70% of Latin America’s population is unbanked or underbanked. The gap left by financial institutions combined with the “digital infrastructure” provided by high internet and mobile penetration rates, means there is an opportunity to improve financial access through mobile technologies.

One emerging solution is digital wallets, which work through top-ups and don’t require a bank account with a physical company or branch to set up. Digital wallets are gaining traction in the region, which sees general mistrust around official banking institutions, and are fast becoming a standard payment method for bills, rent, and retail purchases.

Fintech is developing rapidly in Latin America. There were 703 fintech startups originating in the region in 2017, and there has been an influx of global fintech giants moving into the region to take advantage of the massive mobile market.

GeoPoll leverages unique mobile technologies to run research surveys in Latin America through multiple mobile modes such as SMS, mobile web links, phone calls, and the GeoPoll App. To learn more about our coverage in Latin America and other regions, please contact us.