Report: Mobile Phone and App Usage in Africa and Asia

Over the last two decades, the mobile phone has become more and more integral to many people’s lives across the world. Mobile penetration rates have snowballed in most parts of the world, as the connectivity brought about by the mobile phone becomes indispensable.

It is against this background that GeoPoll has been running a continuous tracker survey on phone usage habits in Egypt, Indonesia, Kenya, Pakistan, the Philippines, and South Africa on the GeoPoll App. This report presents some of the results covering November 2020 through January 2021, consisting of a sample size of 5,594 respondents.

One of the reasons why it is challenging to pinpoint mobile penetration rates in emerging markets is the common use of multiple SIM card phones. In this survey, most of the respondents (85%) said they own multiple SIM card phones, consistent across all countries apart from South Africa, which had the least multiple-SIM owners (55%). The biggest reasons cited for having dual-SIM phones included using some services on one SIM and other services on others (28%), connectivity issues in some areas by different providers (27%), and saving money due to different prices and offers by mobile network operators (23%). 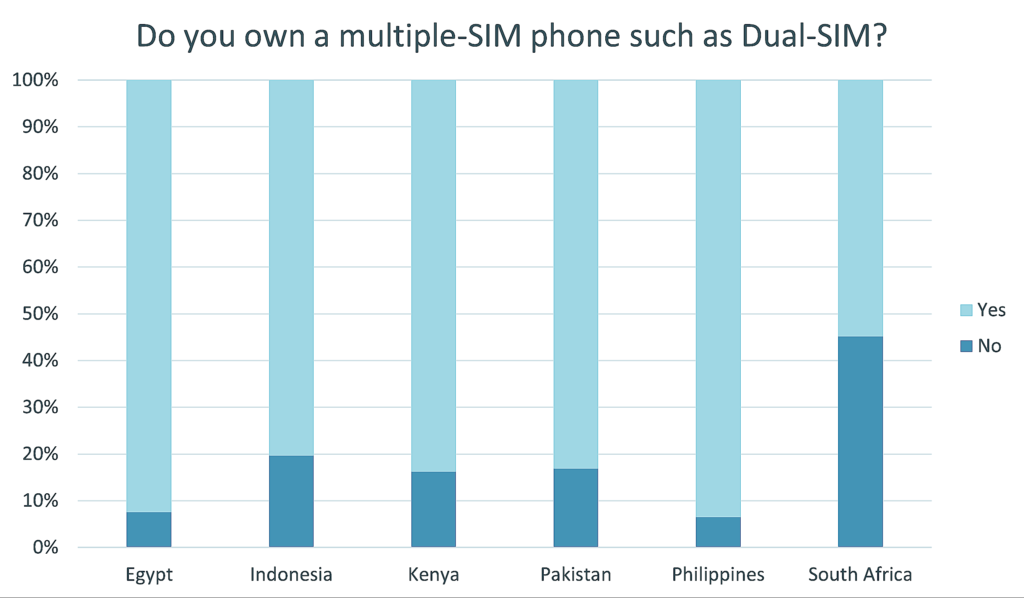 On the flipside, in countries with a higher prevalence of mobile contracts, we observed a higher tendency to own multiple phones. South Africa (45%), Indonesia (42%), and the Philippines (39%) had the highest number of people owning multiple phones, compared with the average of just 14% in Kenya, Egypt, and Pakistan. Most of the people holding multiple devices explained that it is to separate business and personal uses (32%), take advantage of different services offered through different devices (24%), and as a backup in case of loss or breakage (22%).

The mobile phone has become an indispensable part of everyday life. On average, 65% of our respondents stated that they spend over five hours daily on their mobile phones. When buying a phone, storage space is the most critical factor that most people consider in phones (24%), followed by battery durability (18%), the ability for the phone itself to last over time (17%), and the phone’s operating system (16%). This finding, however, varies from country to country. For example, those in Egypt prefer a long-lasting battery most, while those in Pakistan consider the Operating System the most. 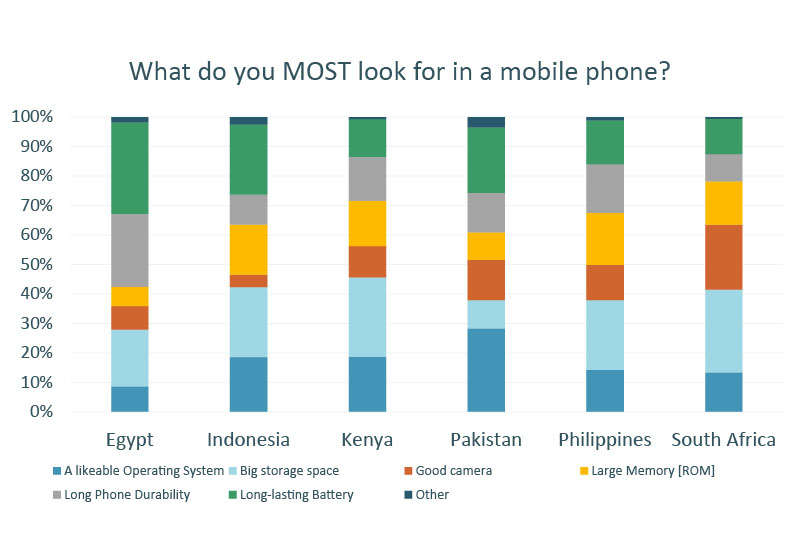 Prepaid SIM cards are simpler for individuals to obtain than fixed-term contracts with operators (postpaid plans), which could be why prepaid mobile plans seem to be the preferred option for many of the respondents (69%). A further 20% said they are on postpaid plans, and 10% use both. Egypt had the highest on postpaid (25%) while the Philippines had the most people on prepaid (80%). 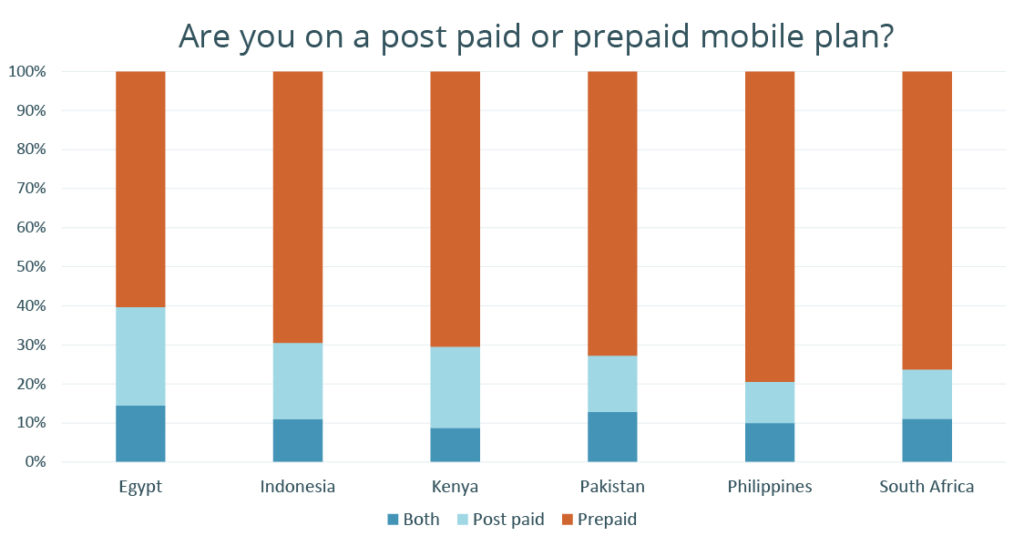 On choosing a mobile network, network coverage and reliability (59%) were cited as the most important factor, followed by the cost of mobile internet data (27%). The cost of calls and SMS generally comes third with six percent, but it is the least important in countries like Kenya, the Philippines, and South Africa, which confirms that the use of the mobile phone has evolved from phone calls and SMS to internet-driven functions.

Over the last few years, businesses and creators have prioritized mobile with mobile responsive websites or mobile applications, as more and more people use mobile phones to access the internet. This was corroborated in this GeoPoll survey, as we found that 70% of the users mostly access the internet on smartphones and tablets. Simultaneously, 24% said they access the internet equally on both the computer and phones. Most people (84%) believe that mobile internet is reliable in their countries. Those in the Philippines (68%) and Pakistan (72%) had the least confidence in their mobile internet reliability.

Probed further on the internet functionalities they use most, 80% said they spend at least one hour every day on social media,  and 74% said they use messaging Apps at least an hour daily. 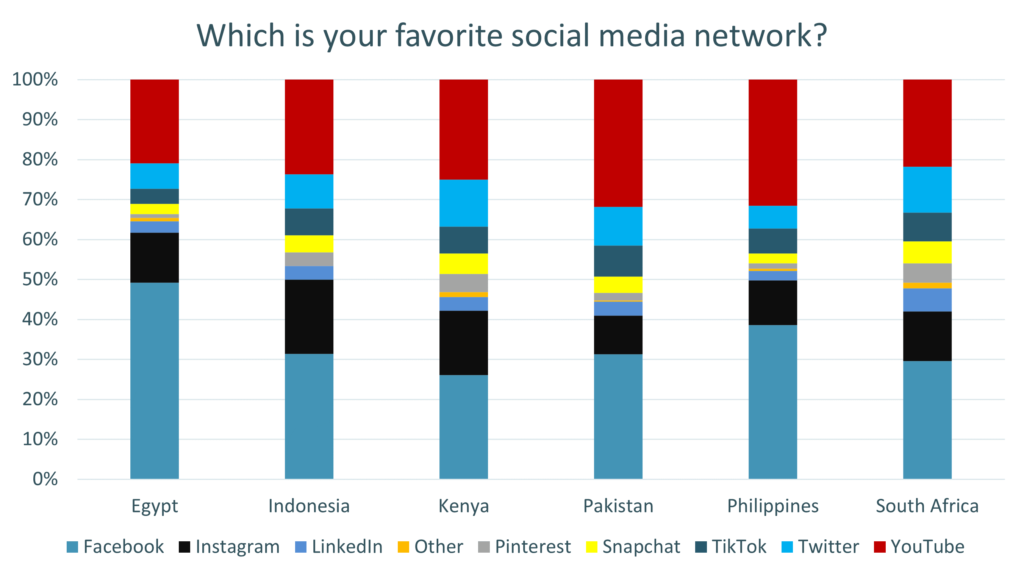 WhatsApp was outrightly the most used messaging platform, with 44% saying they use it over Facebook Messenger (32%) and Telegram (16%).

GeoPoll runs millions of surveys every year through multiple mobile modes across the world. The GeoPoll Application is one of GeoPoll’s data collection methods. It provides a robust platform that can conduct surveys with text, video, and picture questions, quickly disseminate information and other location-based data from its over 500,000 users.

The App and Phone usage survey is an ongoing survey sent to new App users in several countries. It is, therefore, random and may not be entirely scientific. While most ages and country administrative regions are represented in this report, the population may skew towards younger populations in urban areas. This report includes results from 5,594 respondents with 63% males and 37% females spread across under 25 years (47%), between 25 and 34 years old (35%) and above 35 (18%).

To take part in similar surveys and get your voice heard, please join the GeoPoll community, here.