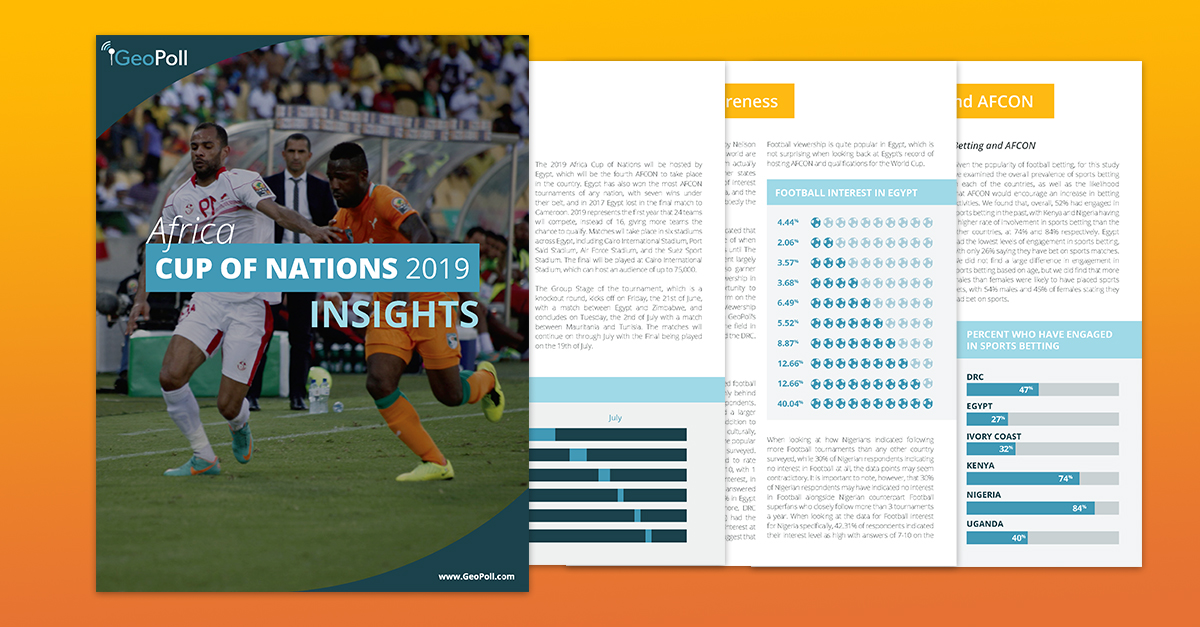 GeoPoll is pleased to announce the release of our newest data report on the Africa Cup of Nations 2019. The free, 20-page report provides data on the intended viewership of the football cup by respondents in Egypt, Uganda, Nigeria, Kenya, Ivory Coast, and the DRC. Sections of the report include interest and awareness of AFCON, how many people intend to watch the tournament, what devices and services people are going to use to watch the tournament, and more.

The Africa Cup of Nations (AFCON) is a biennial football tournament where national teams throughout the continent have an opportunity to compete for the Cup title. Established in 1957, AFCON gives African football teams the chance to compete in a well-recognized tournament that is broadcast across the continent and globally, providing an opportunity for those nations who do not regularly qualify for the World Cup to show their skills. While Africa has a strong history and interest in football, only the top African national teams usually qualify for the World Cup: In 2018, just 5 African teams—Egypt, Nigeria, Morocco, Senegal, Tunisia—played in the World Cup and no African teams have ever made it to the finals of the World Cup, despite the fact that South Africa hosted The Cup in 2010. AFCON, which since 2013 has been played in odd years in order to avoid conflict with the World Cup, gives African national teams and their respective fanbases a chance to come together every other year for the 4-week duration of the tournament.

The 2019 Africa Cup of Nations will be hosted by Egypt, which will be the fourth AFCON to take place in the country. Egypt has also won the most AFCON tournaments of any nation, with seven wins under their belt, and in 2017 Egypt lost in the final match to Cameroon. 2019 represents the first year that 24 teams will compete, instead of 16, giving more teams the chance to qualify. Matches will take place in six stadiums across Egypt, including Cairo International Stadium, Port Said Stadium, Air Force Stadium, and the Suez Sports Stadium. The final will be played at Cairo International Stadium, which can host an audience of up to 75,000.

AFCON is an important event throughout the continent not only for the teams participating but also for their fan bases, the TV stations who will be airing the matches, and the advertising agencies and brands who have invested significant time and money to reach a large, engaged audience of consumers. While excitement for the tournament is building, there is little data around expected viewership of the matches and participation in related activities such as purchasing merchandise and placing bets on matches.

As a leading full-service research provider in Africa who regularly provides insights for top brands, media outlets, and agencies, in June 2019 GeoPoll embarked on a study to gather information on planned viewing habits, betting activities, and brand awareness surrounding the tournament. To gather this data, GeoPoll ran a one-time survey on AFCON to over 2,000 respondents in Kenya, Uganda, Nigeria, Egypt, Ivory Coast, and the DRC. We sought to understand the following:

To learn more about our survey methodology or request detailed sample breakdowns per country, please contact us at info@GeoPoll.com.