Weeks of torrential monsoon rains in Pakistan triggered historic flooding and landslides. Entire villages have been washed away, leaving millions without shelter, food, or safe drinking water. More than 1,700 people have lost their lives. As the water recedes, water-borne illnesses continue to spread. 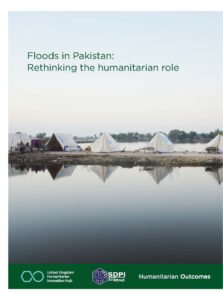 Many of the poorest and most vulnerable areas in Pakistan suffered some of the worst damage from the flooding. According to The World Bank, the destruction of essential infrastructure and loss of incomes and assets threaten to push more than 8 million people below the poverty line. An estimated 7.9 million people have been displaced. Although the Pakistan government has stepped forward to provide immediate relief, large-scale international support is needed to prevent further loss of lives and livelihoods.

Six months after the rains began, the international response to the crisis has been underwhelming – far below contributions for the 2010 flood emergency in Pakistan and well short of need. To gain a better understanding of the response, the international research group, Humanitarian Outcomes, conducted a rapid review under the Humanitarian Rapid Research Initiative (HRRI), a program commissioned by the UK Humanitarian Innovation Hub. The research includes analysis of humanitarian data, interviews with aid workers, donors and government authorities, and a telephone survey of people affected by the floods.

In October 2022, Humanitarian Outcomes commissioned GeoPoll to conduct the telephone survey with flood victims. GeoPoll implemented the survey using its Computer Assisted Telephone Interview (CATI) platform and highly trained remote enumerators. The survey targeted 2,000 people in the hardest-hit provinces of Sindh, Balochistan, Khyber Pakhtunkhwa, and Punjab. A majority of respondents came from Sindh – the worst-affected province. The gender distribution of the sample was 64% male and 36% female.

GeoPoll’s telephone survey, developed in coordination with Humanitarian Outcomes and other research partners, asked questions related to the perceived source and effectiveness of aid received, success and challenges of aid delivery, and concerns for the future.

Responses to the telephone survey show widespread dissatisfaction with the international relief response to this point and trepidation about the future.

The full results from the rapid review study can be found in Humanitarian Outcome’s Floods in Pakistan: Rethinking the humanitarian role report. The report is available for download in both English and Urdu.

Remote surveys conducted through mobile devices are a fast and safe mechanism for gathering on the ground data in times of crisis. Over the past decade, GeoPoll has developed a unique remote research system and methodologies supported by an extensive respondent database, to be able to assist essential humanitarian interventions through the provision of fast, reliable information in any environment and under any circumstance.