We are now well into the Round of 16 of the World Cup, and are still seeing high levels of interest in the games from the 5 African countries included in GeoPoll’s Audience Measurement service, which measures daily TV viewership through mobile surveys. Last Thursday, Ghana played against Portugal in a last-ditch effort to make it to the next round, but lost 2-1 to Portugal, and both teams failed to make it past the so-called “Group of Death”.

3 million Ghanaian viewers tuned in to see their loss on Thursday, down from the 3.7 million who watched the crucial Ghana-Germany game. Since then, viewership of World Cup matches in Ghana has gone down, although audience size during World Cup games remains higher than average. So far, at most 2.1 million have tuned in to the Round of 16 games in Ghana.  Below you can see Ghanaian viewership over time.  As demonstrated, Ghana viewership has gone down as the World Cup has progressed, with notable exceptions during Ghana’s own matches. 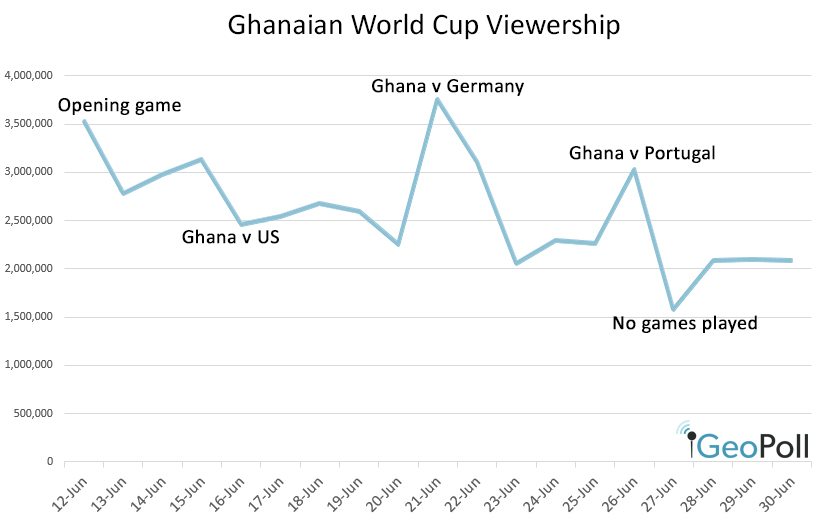 We have also measured viewership across Ghana, Kenya, Nigeria, Uganda, and Tanzania, and over the past few days of play found that the Nigeria-France and Brazil-Chile games have been most popular. 23.7 million adults across the 5 countries watched Nigeria lose to France, and even more watched the Brazil-Chile game on Saturday: 24.9 million tuned in to that match.  On Sunday, the most popular match was Netherlands-Mexico, which drew 20.1 million.  We will release more in-depth insights on the most popular teams and matches in the next few days, and make sure to keep following us on twitter @GeoPoll for daily viewership updates!

To get daily access to this data, sign up for a trial of our Audience Measurement Service: