Jumia, an e-commerce store in Africa, has been rapidly gaining clout in the business world, both in Africa and across the globe. The increase in attention is well deserved seeing as the start-up company launched in 2012 and reached a billion-dollar valuation by 2016, which was just four short years. Although the company is not yet grossing profit, its revenue had a 42% increase from 2016 to 2017, a 70.9% increase from 2017 to 2018, and is expected to keep growing.

Jumia’s revenue growth truly is impressive but it also displays the growth of the consumer market in Africa overall. Consumer spending throughout Africa has grown 3.9 percent each year since 2010. 53% of income earners in Africa are between 16 and 34 years old and these consumers are predicted to spend exponentially in the coming years. According to a report by McKinsey from 2015, “….[African] consumers will contribute to more than $400 billion in total consumption growth in the next decade….” All the while, Jumia is building a brand that is making online shopping, and product delivery, accessible to Africans. 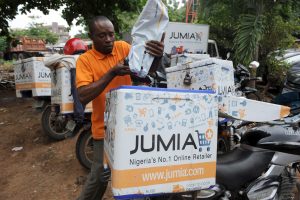 The prominence and potential profitability of online shopping in Africa is likely surprising to some. We may know that the world wide web does indeed stretch across the globe, but Internet penetration rates have historically been low throughout Africa. However, access to the Internet is rapidly changing throughout the continent and it is now safe to say that Africa’s digital revolution is thriving.

According to Internet World Stats, on June 30th 2018, Africa had a 36.1% rate of Internet penetration, which indicates 464,923,169 Internet users. Additionally, at 10,199% growth in Internet users between 2000 and 2018, Africa’s Internet user growth rate is higher than the Internet user growth rate of the rest of the world combined. Despite this, Africa still has the lowest percentage of population online compared to the rest of the world, which indicates how much potential the market has for expansion of Internet connectivity, and subsequent online shopping, in the coming years.

As the continent becomes more and more connected to the Internet and the consumer class continues to grow, Africans are going to become an even more valuable consumer market. Jumia’s growth and development of online shopping infrastructure is aligning perfectly with Africa’s digital revolution. The company’s current online sales are likely from individuals living within the top tier socio-economic classes in Africa, which only shows that Jumia’s billion-dollar valuation is a modest beginning when considering where the valuation may end up in the next five-to-ten years when Internet penetration rates and consumer spending intersect.

Beyond e-commerce, expanding brands interested in emerging markets should be paying special attention to Africa as a continent full of revenue opportunity. The consumer base in the continent skews young and these teenagers and young adults are becoming more equipped with disposable income and the desire to spend. Many FMCG companies have already expanded into Africa so the time is nigh to impact consumer perceptions of your company’s brand before the continent is flooded with competition.

To learn more about African consumers, hire the experts. GeoPoll specializes in conducting market research in emerging markets, with a special focus on Africa. We use multi-modal mobile survey research solutions to gather valuable data from consumers in hard to reach areas of the world. Our team can help your company navigate the cultural challenges that come with developing questionnaires for an unfamiliar market and can assist with drawing conclusions from a survey project’s resulting data. GeoPoll does all of this quickly and in real-time. To learn more about how GeoPoll can help your company accomplish goals, contact us today!