Sub-Saharan Africa has not experienced as many COVID-19 cases as other regions. However, there has been a significant impact on day-to-day livelihoods, with varying degrees of restrictions across countries. Internal and external trade and tourism almost come to a standstill for vast stretches of time. In turn, this economic downturn has had ripple effects on many businesses and individuals’ financial situations. A report by GeoPoll in July 2020 found that 76% in 6 countries in sub-Saharan Africa had lost income due to COVID-19, primarily influenced by the large percentage of the population who operate in the informal economy.

As a follow up to GeoPoll’s earlier reports on the impact of the coronavirus pandemic in sub-Saharan Africa, we conducted the GeoPoll Year-End survey evaluating the year that has been and the outlook for the coming year.

The Economic Impact of COVID-19 in Sub-Saharan Africa

When asked about the coronavirus pandemic’s biggest challenges, finances stood out as the overwhelming challenge (55%), with ‘staying home’ trailing at 23% as the second biggest challenge. This finding could be tied directly to findings surrounding income changes since June, as 79% stated that their income had decreased since June. This percentage is even higher than the 76% who reported income decreases in our previous study. In addition, 65% state that they are more concerned with paying their expenses now than in June 2020, when 71% were already more concerned with paying expenses than pre-COVID. 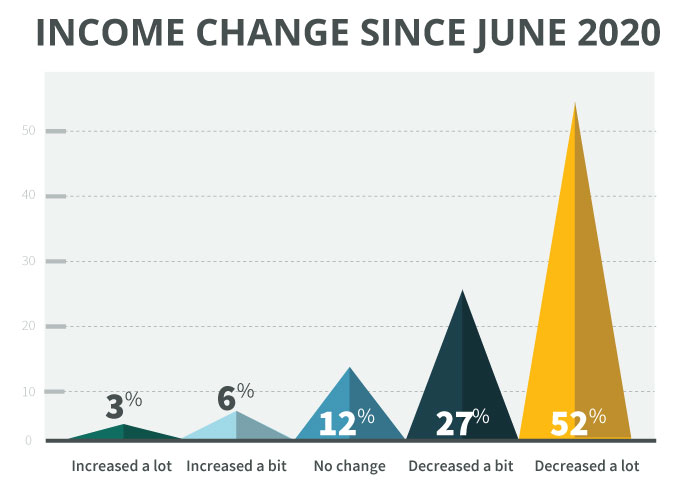 These findings demonstrate that even though restrictions have been loosened in all six countries studied, the pandemic’s economic impacts continue to be felt and, for many, have worsened over time. While all countries reported high levels of income decrease, Kenya had the highest percentage of respondents who said their income had decreased a lot compared to June 2020, at 64%.

Even though restrictions have been loosened in all six countries studied, the economic impacts of the pandemic continue to be felt and for many have worsened over time – GeoPoll

Changes to Consumer Habits Due to COVID-19

Given the decreases in income observed, it is not surprising that we also observe changes in spending patterns, with consumers focusing more on essential items than non-essentials. In addition, one of the effects of the pandemic has been a scarcity of products due to disruptions in supply chains, which has resulted in rising prices of various commodities. These factors could be some of the reasons most respondents (60%) in the GeoPoll study reported spending more this year compared to last year on essential items such as food, while just 23% are spending less.

The report also shows a large shift away from non-essentials, with 59% saying they are spending less on clothes and beauty products than last year.

In contrast with several other countries where online shopping has increased during the pandemic, it has dropped in Sub-Saharan Africa. Nearly 60% report that they are shopping online less frequently than last year, which could be related to the overall decrease in purchasing of non-essential items. Compared to the previous year, 45% report they are using mobile money less frequently on mobile money usage, while 21% say they are using mobile money at about the same rates and 35% are using it more regularly.

It must be noted that, as with other findings in this summary, some of the considerations vary from country to country. For example, while online shopping decreased overall, more respondents in Kenya and South Africa reported shopping online more frequently, and over half (51%) of those in Kenya said that they are using mobile money more than the previous year, while 42% in Mozambique reported increasing their mobile money usage.

To see the statistics breakdown for each country and demographic, refer to this interactive report.

Consumer spending is also experiencing changes; as the holiday season approaches, McKinsey’s study in South Africa found ongoing reductions in discretionary spending and that 88% of households expect to spend the same or less on the holidays as they did last year.

The 2020 holiday season is expected to be impacted by COVID-19, both socially and economically. Countries like Kenya have restrictions on night movement, meeting numbers, and hospitality business operations in place and studies have found that those in South Africa and other countries are planning to spend less on the holidays this year than in the past. GeoPoll’s research found similar results, with 40% overall stating that they will spend much less than last year, and 28% stating they will spend a bit less. Just under a quarter of respondents report they will spend more on the holidays this year, indicating that retailers should expect a decrease in holiday spending in 2020.

Economic Predictions for Next Year

As 2020 comes to a close, GeoPoll also examined the outlooks for next year. GeoPoll asked about the length of financial impacts of COVID-19, finding that almost half (45%) think economic effects will last at least six months, and 27% believe that the economic impacts will last over a year. 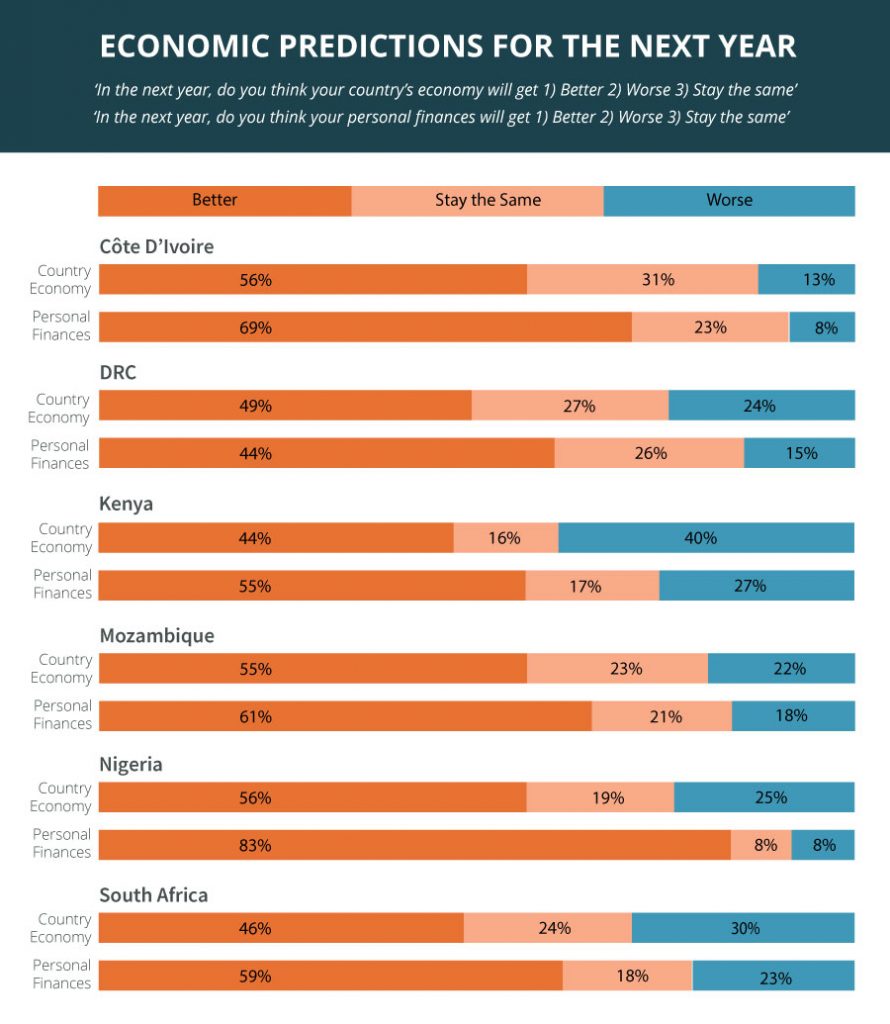 These findings on consumer behavior are part of GeoPoll’s report on the impact the coronavirus pandemic has had on various life spheres. Download the full report here or dive more in-depth into the full dataset with the interactive dashboard here.

GeoPoll conducts surveys globally through multiple mobile-based methods, remotely reaching any population. GeoPoll can conduct research to enable brands, international development organizations, and governments better understand realities on the ground, even in the face of the challenges the world is undergoing. To request more information on our capabilities or get a quote for an upcoming project, please contact us.