Following on the Africa Musical survey we conducted earlier this month in Kenya, Nigeria, Ghana, and South Africa, we are pleased to present part two of the findings. Part one of the report series covered favorite genres, music listenership habits, and access. In this edition, we will explore more findings from the survey, such as what influences music preferences and the length listeners go to access and keep in touch with music.

Several factors influence the success of a music release. Some of these factors are rational—like the quality of the song, music video, or coverage—while others are less rational—like diehard fans who love every song their favorite musicians produce. In order to probe into this topic, we asked respondents what influences a fans’ reception of a particular song. A majority of people (44% for the song itself and 13% for its video) responded that they like a song when they feel the song deserves it. 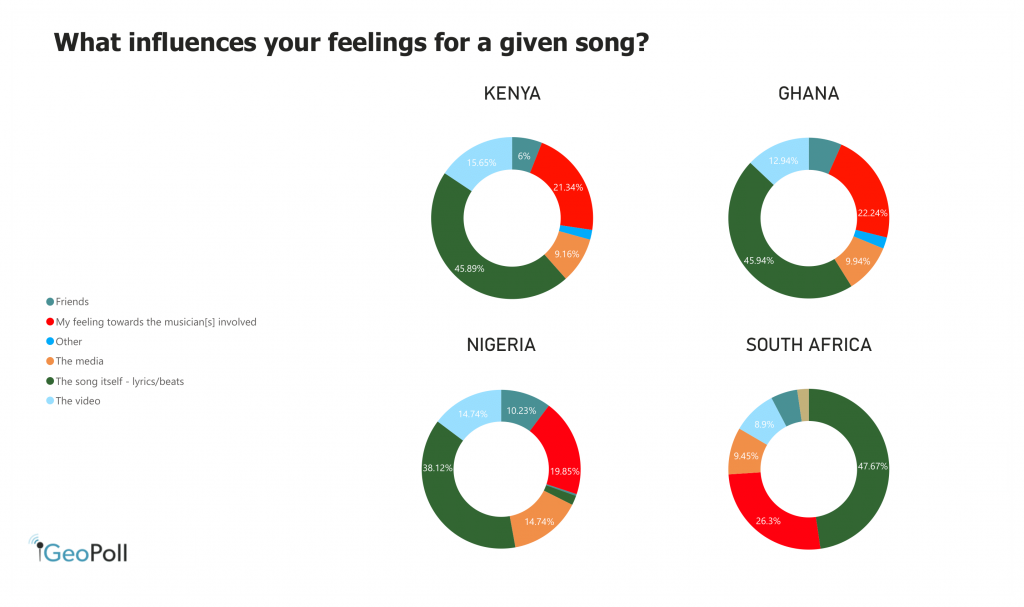 What makes a song a Hit or a Miss?

It is worth noting that a considerable amount of fans (22.4% across the four countries) attach great importance to their feelings towards the musician(s) involved, which indicates that the artistes’ branding is paramount.

The business of music

A large proportion of people have always believed that, for the most part, music doesn’t pay in Africa and that one cannot easily make a living out of music or other forms of art. Often, parents will discourage their children from music. Now, more and more people are embracing music as employment, and it is becoming a big part of African economies like Nigeria.

From our last article in this series, we found that streaming services are growing but not very quickly. Several people reported ceasing subscriptions to music streaming services due to the availability of free file sharing websites. For this reason, we sought to know if music lovers are paying for their music at all: 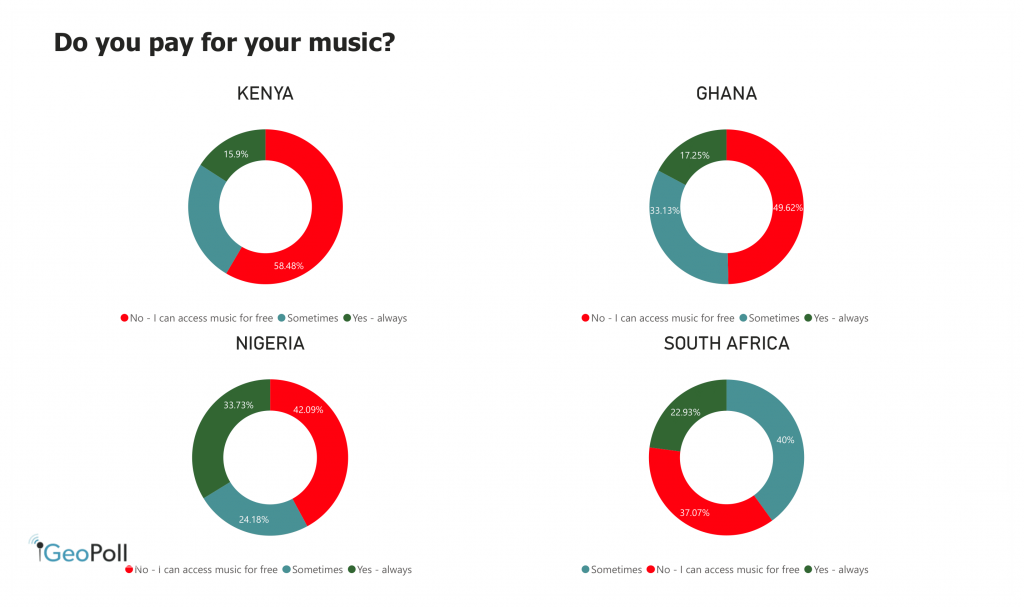 Do you pay for your music?

Nigeria had the highest percentage of users who always pay for music (33.7%) while a majority of Kenyan users (58.48%) reported they don’t buy music because they can access it for free.

Remarkably, concerts and music shows were very popular among respondents. The majority of users in Kenya (60%), Nigeria (65%) and South Africa (54%) all reported that they attend concerts, while in Ghana, the majority said they did not attend concerts (45.2%). 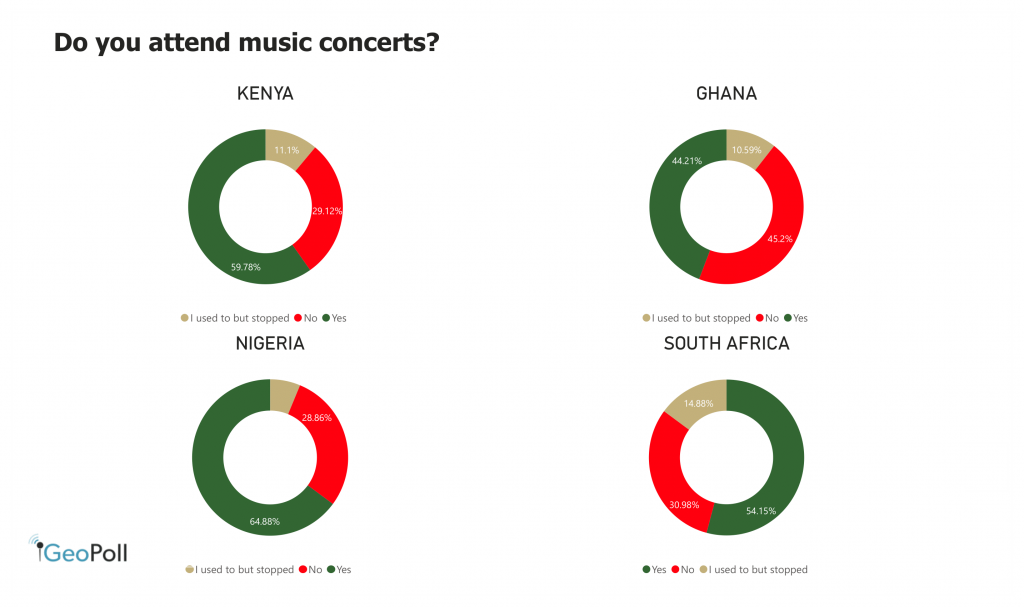 Do you attend music concerts? 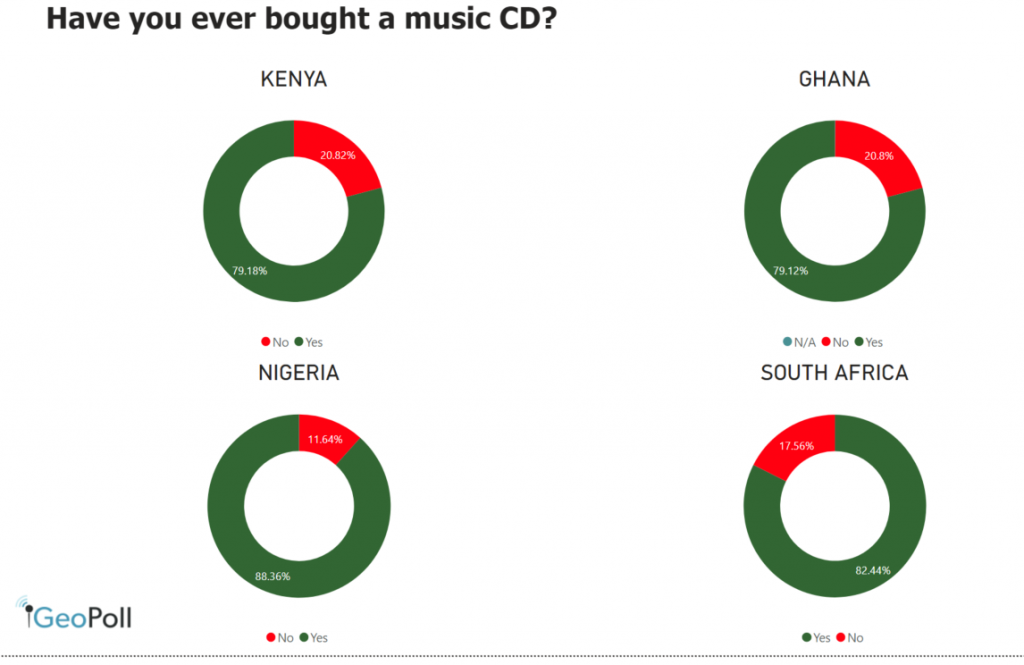 Have you ever bought a music CD?

Entertainment news is one of the most popular forms of news, especially among the youth. With the love for music comes the drive to learn about new songs and the goings-on in the celebrity space. From the survey, Television is the most popular source of music news in Kenya (31.46%), Ghana (32.60%), and Nigeria (30.26%), only edged slightly by Blogs and Social Media (29.16%) in South Africa. Overall TV, Blogs/Social Media, and Radio are the top 3 channels through which fans follow their favorite musicians. 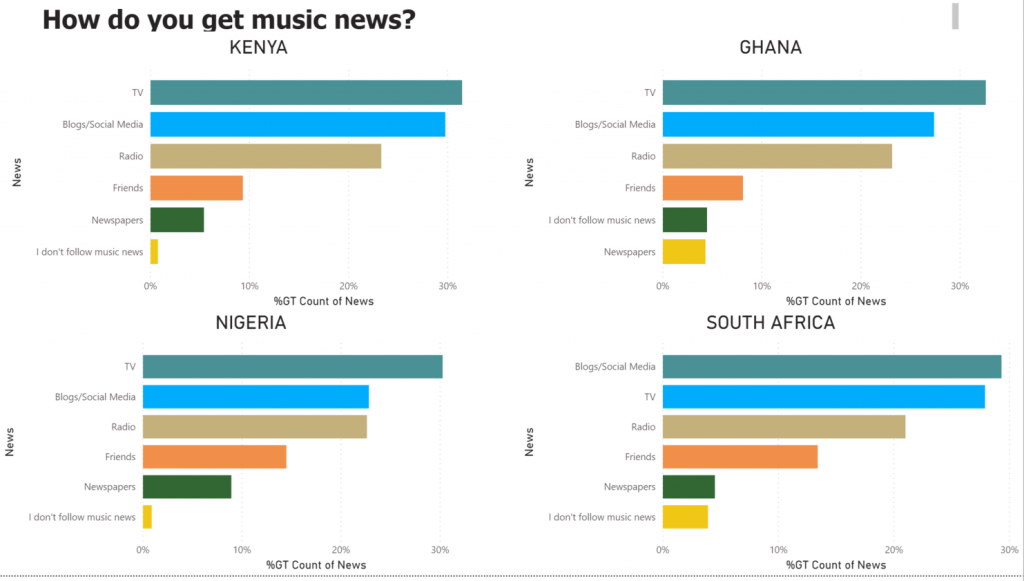 Music preferences can be highly trendy. There are all-time classics that remain trendy over a long time, songs that hit for a time, and songs that are replaced as newer songs are released or newer artistes enter the scene. In this study, we sought to identify users’ feelings on music improvement with time: 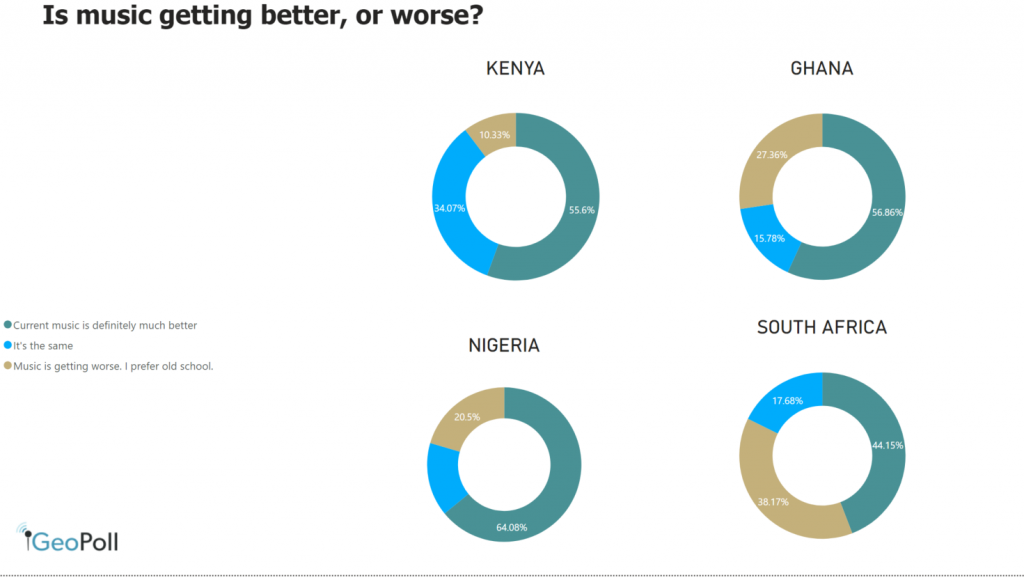 Is music getting better with time?

Overall, a majority (over 55%) of the respondents agree that music is getting better with time, with Nigerian listeners at 64.08%. South Africa has the highest percentage (38.17%) who feel that older music was better, with Kenya mostly indifferent (34% say music has remained the same).

GeoPoll offers more mobile-based modes than any other research provider in Africa, Latin America, and Asia, allowing our clients to reach their target audience quickly. Our team are experts in producing actionable insights from around the world and guide you throughout the research process.

We conducted this Rapid Survey via the Mobile Application Mode by targeting a random sample of the GeoPoll App users. To learn more about the methodology we used in conducting this survey, and learn about our capabilities in different parts of the world, please contact GeoPoll here.