Increased dependency on technology and a mobile-first approach is being driven by African Millennials, this is according to a recent GeoPoll rapid survey carried out among youth in five Sub-Sahara African countries between the ages of 18-35.

As detailed in our earlier reports on the African Millennials series, Africa has the highest youth population in the world with 200 million people aged between the ages of 15-24. The current trend indicates that this figure will double by 2045, according to the 2012 African Economic Outlook report prepared by experts from the African Development Bank (AfDB)

Millennials across the world are defined by their uptake of technology. Affinity to technology by millennials world-wide and specifically so in the west is a study that is currently ongoing and continues to be a fascinating undertaking especially in regards to the African Millennials.

Despite lack of access to smartphones and reliable internet connectivity, the level of uptake and penetration in Africa has hit major milestones in the last 5 years.  According to a report published by GSMA on Africa’s mobile economy in 2016, smartphone adoption in Africa has doubled in two years. Among Sub-Sahara African countries, South Africa has the highest number of smartphone subscribers at 34% followed by Nigeria, Senegal and Kenya.

Like their global counterparts, African millennials are increasingly using download sites to access video entertainment and social media sites as tools for communication and a source of news and information. Mobile data continues to be the most used means through which African millennials access the internet. Social network platforms such as Facebook, WhatsApp and twitter have become an integral part of everyday life with over 60% using social media as their primary source of information. Television comes a distant 2nd at 25% with newspapers being the least important source 6%.

The second screen phenomenon though not highly prevalent among African Millennials, is one that might change with time. 57% of African Millennials say they sometimes use their smartphone while watching TV, 35% said they are always on their phone. This can be attributed to data costs which are still relatively high in many African countries compared to the rest of the world as well as changing preference among this group on choice of entertainment.

Access to video entertainment among African Millennials is undergoing a significant shift.  There is decreased demand for bootleg DVDs generally across the countries that took part in the survey except in Ghana. According to the survey, more millennials in Africa are accessing their movies and TV series entertainment through online downloads. They spend the least time in the cinemas compared to the other ways of accessing video entertainment selected for the survey. Subscriptions to online video streaming services such as Netflix, Amazon, Apple and Showmax are still relatively low with a majority indicating that they do not use these services. Out of those who indicated that they are using it, Netflix is the most popular. 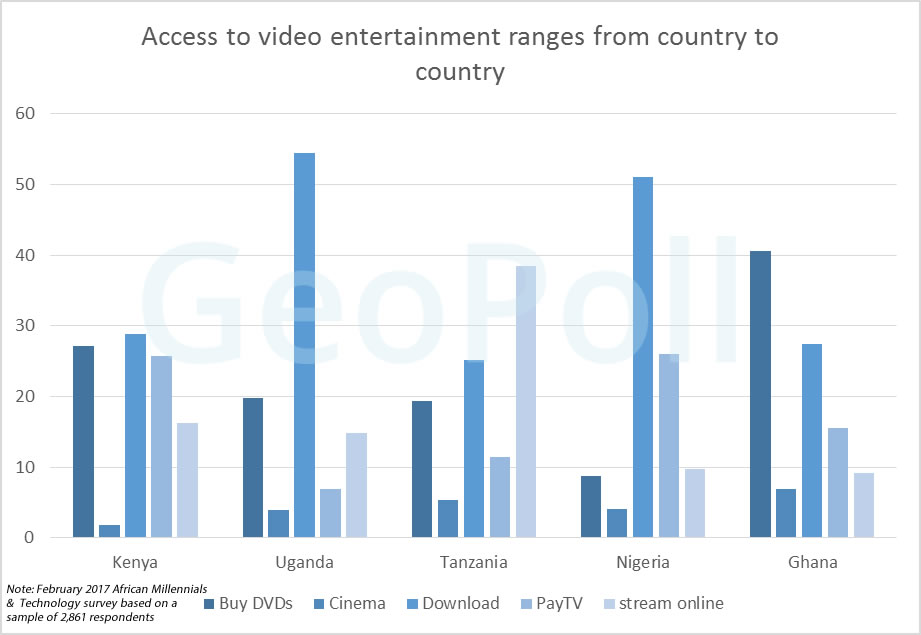 When it comes to the most preferred mode of communication among millennials, Kenyan and Tanzanian Millennials prefer texting (62%) & (54%) whilst Nigerians and Ghanaians prefer calling through the mobile operator (58%) & (51%). Mobile data calls through WhatsApp and Facebook messenger are still not as widely used.

The use of social media platforms such as has become second nature to African Millennials’ lives; WhatsApp and Facebook rank among the platforms with the most usage. 56% have created and are most active on WhatsApp  , while 31% are active on Facebook. Not only do African millennials spend more time on their smartphones than on any other gadget on a daily basis, but they are also more likely to be on WhatsApp chatting. A majority (46%) are actively engaged daily in at least 1-3 WhatsApp groups.

Phone addiction is starting to manifest itself among African Millennials as 48% use their smartphones while in the bathroom.

Not only do African millennials spend more time on social media sites, but they also spend as much time gaming. The most downloaded app by category are social networking, gaming, instant messaging, banking/finance, education, health & fitness.  Ugandan, Ghanaian and Kenyan millennials have more game apps downloaded on their smartphone than any other application. The use of power banks though evident is not yet prevalent.

African Millennials are vanguards of a future Africa and technology is becoming an integral part of it all. As younger millennials continue to make their impact felt in almost every sector, a mobile first approach is crucial for any company that seeks to reach this culture-rich group of image-conscious, educated and opinionated individuals.

This GeoPoll rapid survey was conducted in February 2017 among 2,861 respondents between the ages of 18- 34 in Kenya, Uganda, Tanzania, Ghana and Nigeria using the GeoPoll App.

Download a copy of this report with more detailed graphs.

Read our other reports on this series on African Millennials on spending habits and on side businesses.

African Millennials: The Myths, The Reality