Case Study: Assessing the Impact and Audience Perceptions of the "My Better World" Animated TV Series

Impact(Ed) International (formerly Discovery Learning Alliance) is an organization that uses the power of media to transform education and equip young people to thrive, mainly through the development and distribution of story-based films, talk shows, animated series, and mass media campaigns to change attitudes and behaviors regarding critical topics in public health, youth agency, and girls’ education. One of the shows that Impact(Ed) produces and distributes is a young adult show called My Better World which seeks to deliver important messages related to education and life skills for African youth. Impact(Ed) was looking to better understand the audience of My Better World and the measurable effects of the show, and turned to GeoPoll to conduct two audience measurement surveys in different areas in Nigeria where the My Better World program was being aired in both English and Hausa. GeoPoll’s experience with conducting media studies and ability to reach respondents in rural locations made GeoPoll a natural fit for this study.

As part of this audience study, GeoPoll collected 1000 SMS surveys; 500 each for the Hausa and English-speaking audiences. GeoPoll collaborated closely with the Impact(Ed) team to design a questionnaire formatted for SMS delivery that would return usable data on the show’s impact and audience perceptions. The sample was recruited from GeoPoll’s database in Nigeria, and respondents answered a screening question in order to identify viewers of the My Better World program who were aged 15-65 and split as evenly possible between male and female. The English-only survey was aimed at reaching audiences living in Lagos State, the Federal Capital Territory (Abuja), and Kano State who viewed My Better World on AIT TV, and the Hausa language survey was delivered to audiences living in several states across Northeastern Nigeria who watched the program on the Hausa-language station Arewa24. 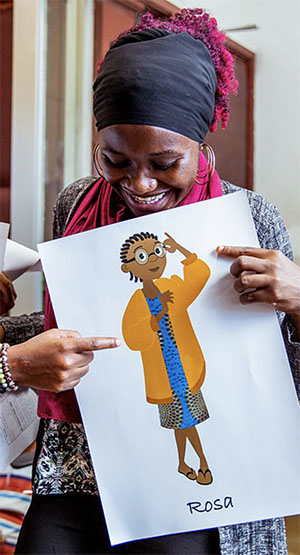 The survey asked respondents about their viewing habits, finding that for both surveys at least a third of viewers had watched 6 episodes or more, and that 78% of the Hausa language respondents and 84% of the English language group had watched the show on a TV at their own house. About three quarters of the participants from both studies reported that they discussed the episodes and their themes with others, a majority of whom talked to their friends, while a smaller number of respondents talk to their children, parents, or “others”.

The study also sought to determine which of the show’s central themes had made lasting impressions and how intended behavior and perceptions had changed after watching the show. Education was the theme most frequently observed by both the Hausa language audience (50%) and the English language audience (53%). Other commonly viewed themes for the Hausa group included Public Health and Safety (35%), Early Marriage (34%), and Gender Equality and Poverty (31% each). Similarly, 41% and 40% of the English group noted Early Marriage and Gender Equality respectively as themes of the show, with Public Health and Safety, Poverty, and Communication noted by 35% each.

Almost all of the audience members for both the Hausa and English study groups reported that watching My Better World changed the way they view the role of guardians in the education of children, and over 90% of both groups also indicated that they were much more likely to support girls’ education in their community after watching the show. Over 95% of respondents in each of the two groups also reported that they felt empowered to take a more active role in making their community a better place, and when asked how, the top response was to advocate for education.

These findings have provided Impact(Ed) with significant evidence as to the effectiveness of the My Better World show in influencing its audience’s behavior and perceptions in a positive way. The data collected regarding the participant’s viewing habits can also be used to improve the ability of future media campaigns to connect with their desired audience. The results of these two SMS surveys have better positioned Impact(Ed) and their partners to deliver more effective programming in future projects and contribute to the growing body of evidence in support of media as an effective behavior change tool.